The film will feature Vijay, for the first time in his career, in an out-and-out action-packed character. The film will be high on action, sources have revealed. 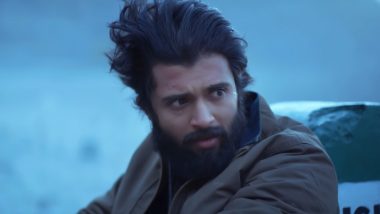 Mumbai, January 20: Actor Vijay Deverakonda's new yet-untitled Telugu film with director Puri Jagannadh went on the floors here on Monday. The project, which is rumoured to be titled "Fighter", marks the maiden collaboration of Vijay and Puri Jagannadh.

Puri Jagannadh, an erstwhile associate of Ram Gopal Varma, is known for films such as "Pokkiri", "Businessman" and "Temper". He even directed the Hindi film "Bbudadh Hoga Tera Baap" featuring Amitabh Bachchan. His last release was Telugu action thriller "ISmart Shankar", which went on to be a box-office hit. World Famous Lover New Poster: Vijay Deverakonda's 'No Abs, No Worry' Look is Unusually Hot (View Pic).

The film will feature Vijay, for the first time in his career, in an out-and-out action-packed character. The film will be high on action, sources have revealed.

Deverakonda will play a character with stutter. Over the last few weeks, he underwent training in mixed martial arts in Thailand for this project. He's expected to sport six-pack abs for this project, which is eyeing summer 2020 release.

The film, which will be presented by Karan Johar and Apoorva Mehta in Hindi, also co-stars Ronit Roy and Ramya Krishnan. Plans are underway to release the film in all southern languages as well.

(The above story first appeared on LatestLY on Jan 20, 2020 03:40 PM IST. For more news and updates on politics, world, sports, entertainment and lifestyle, log on to our website latestly.com).