Thank God is a slice of life drama that will showcase how lord of death can teach some key lessons of life. Directed By Inder Kumar, Thank God will also feature Sidharth Malhotra and Rakul Preet Singh. 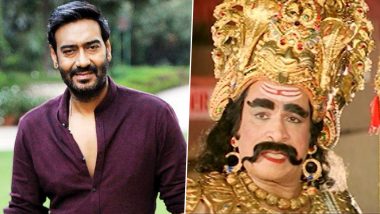 Ajay Devgn is known for pulling off something so unique that his fans are always eager to find out what the Bollywood star is going to do next. The 51 year old actor is busy working on his forthcoming endevours 'Maidan' and 'Bhuj:Pride Of India' but what he is simultaneously working on is an interesting film titled Thank God in which Devgn will play Yama, the lord of death. The modern version of this death lord, and how it can be stylized, is what the think tank of the film is working on, we gather.

A little birdie chirps to us that this film and its look will bear a close resemblance to Akshay Kumar's Oh My God! in which Kumar had played the modern version of lord Krishna. "The twist in the tale is that the makers are so influenced by Kader Khan's Yama avatar from the 90s film Taqdeerwala that Khan's role can serve as a good template in terms of humor and wisecracks for this film. So, don't be surprised if Ajay will be seen in that avatar in Thank God," informed the source. Mayday: Boman Irani To Play The Role Of An Airline Owner In Ajay Devgn’s Film

Thank God will also witness Rakul Preet Singh and Ajay Devgn coming together for the third time. The duo has worked on the 2019 film De De Pyaar De and are reuniting for Mayday.

(The above story first appeared on LatestLY on Feb 03, 2021 03:49 PM IST. For more news and updates on politics, world, sports, entertainment and lifestyle, log on to our website latestly.com).