Creator of the musical, Lin Manuel Miranda tweeted the trailer on Sunday, along with the words "May you always be satisfied" referring to the song "Satisfied" from the musical. 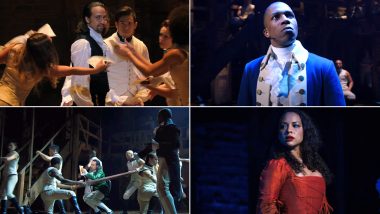 The award-winning musical, Hamilton featuring the original Broadway cast is all set to release on Disney Plus. The film was shot onstage at The Richard Rodgers Theatre on Broadway in 2016 and we bet all those who dreamed of watching the musical live will now find solace in watching it online. Disney+ will be premiering Broadway musical on July 3. Broadway has been shut since mid-March due to coronavirus and hence makers decided to bring Hamilton to homes for the US Independence Day. Creator of the musical, Lin Manuel Miranda tweeted the trailer on Sunday, along with the words "May you always be satisfied" referring to the song "Satisfied" from the musical. Dafne Keen Bonded with ‘His Dark Materials’ Co-Star Lin-Manuel Miranda Over Singing While Shooting the Air Balloon Scene.

It is one of the most critically-acclaimed shows. For the uninitiated, the show is a hip-hop stage biography of founding father Alexander Hamilton. With Miranda in lead, the show also stars Daveed Diggs, Phillipa Soo, Jonathan Groff, Renée Elise Goldsberry, Christopher Jackson, Jasmine Cephas Jones, Anthony Ramos, and Okieriete Onaodowan. Originally scheduled for October 2021 release, the release was preponed amid coronavirus.

Hamilton is one of the most acclaimed Broadway shows and has won several prestigious accolades including the Pulitzer Prize for Drama and 11 Tony awards, including Best Musical.

(The above story first appeared on LatestLY on Jun 22, 2020 08:16 PM IST. For more news and updates on politics, world, sports, entertainment and lifestyle, log on to our website latestly.com).