Amber Heard has found love, again. The Aquaman actress was once again spotted with rumoured girlfriend, Bianca Butti. This time the two ladies were at 4th Annual Women's Day March in LA, where Amber took to the stage for a heartfelt speech. 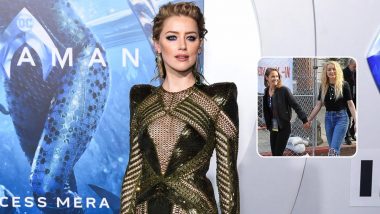 Amber Heard has found love, again. The Aquaman actress was once again spotted with rumoured girlfriend, Bianca Butti. This time the two ladies were at 4th Annual Women's Day March in LA, where Amber took to the stage for a heartfelt speech. In photos and videos going viral online, the two ladies could be seen walking, holding hands at the venue. A few days earlier, Bianca and Amber were spotted kissing each other at Palm Springs. Either of them is yet to comment on the status of their relationship. But, we guess, this PDA is sort of making them official. Don't you think? Amber Heard Uses Jason Momoa’s Nipple-Baring Pic to Blast Instagram’s Nudity Guidelines After App Deletes Her Picture in the Same Pose.

At the Women's March, Amber spoke from the heart and alluded about the tough times she has had in life. "I rose from my bed one day, from two years into my own private battle, and I smelled smoke," she began her moving speech, as per a report TMZ.

"I had, for years, walked with tired and weary feet into battle every single day... longing for a different kind of world, one in which I used to live."

Here Are The Latest Pictures Of The Rumoured Couple:

Saturday was no different when the new couple were seen holding hands and flashing big beaming smiles when they arrived at the 4th Annual Women's March in Downtown Los Angeles. pic.twitter.com/NBBAa1n70Y

Here Are The Pics Of Their Kiss:

It is yet to be known how the 33-year old actress and the 38-year old cinematographer met each other. We'd love to know more details on this alleged love story. Amber Heard Reveals How Her Religious Parents Reacted When She Opened Up About Her Sexuality: They Didn’t Know How To Process It.

Amber has been very vocal about her bisexuality, since she has come out to the public in 2010. She has expressed that the biggest challenge to her was how her parents reacted to her orientation.

(The above story first appeared on LatestLY on Jan 19, 2020 08:06 PM IST. For more news and updates on politics, world, sports, entertainment and lifestyle, log on to our website latestly.com).