According to mypost.com, the Bronx-born rapper was struck multiple times at The Promenade in Edgewater. The Bergen County Prosecutor's Office said cops responded to reports of shots fired at the location just after midnight. 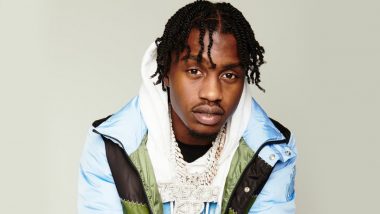 American rapper Lil TJay was one of two people shot in New Jersey early Wednesday morning, just weeks after declaring it was going to be "a good summer." According to mypost.com, the Bronx-born rapper was struck multiple times at The Promenade in Edgewater. The Bergen County Prosecutor's Office said cops responded to reports of shots fired at the location just after midnight. Tyler Sanders Death: Star of Just Add Magic- Mystery City and Fear the Walking Dead Passes Away at 18.

When they arrived, they discovered 21-year-old Lil TJay, whose real name is Tione Marriot, with multiple gunshot wounds. Antoine Boyd, 22, was also found with a single gunshot wound, officials said. Both were transported to an area hospital for treatment. Officials did not release their conditions, however tmz.com reported that Lil TJay underwent emergency surgery. Sidhu Moosewala Shot Dead: Drake Condoles Punjabi Singer’s Death With an Instagram Story (View Pic).

Officials said the shooting happened after Mohamed Konate tried to rob Lil TJay, Boyd and a third person the rapper was with, 24-year-old Jeffrey Valdez. Both Valdez and Boyd each had an unlawful weapon on them at the time. Konate was arrested later on Wednesday by detectives from the Bergen County Prosecutor's Office and the New York Police Department. His extradition to New Jersey is currently pending, officials said, reports nypost.com.

Lil Tjay is a Bronx-born rapper with over 7 million followers on Instagram. He rose to fame on Soundcloud and was signed by Columbia Records in 2018. His debut album, 'True 2 Myself' peaked at No. 5 on the US Billboard 200. In an Instagram post just two weeks before he was shot, the rapper posted a video of himself dancing shirtless with a big chain with the caption "dis gon be a good summer." Fellow artistes and athletes offered their prayers for the wounded rapper. "Pray for my lil bro lil Tjay," tweeted hip-hop star French Montana.

(The above story first appeared on LatestLY on Jun 23, 2022 04:30 PM IST. For more news and updates on politics, world, sports, entertainment and lifestyle, log on to our website latestly.com).