Annabelle Comes Home New Clip: Lorraine is Convinced About the Doll Being a Beacon of Other Evil Spirits (Watch Video) 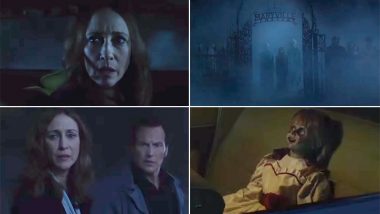 Patrick Wilson and Vera Farmiga return as Ed and Lorraine in Annabelle Comes Home that's slated to release on June 28. The Conjuring that released in 2013 is one of the most popular horror franchises in the west and honestly, it's far better and scarier than its numerous spin-offs. While this latest offering will see Annabelle- the doll creates havoc in the life of Warrens, it's the new clip that makes you aware of her creepy intentions. Annabelle Comes Home Trailer 2: The Ferryman is Coming to Steal Judy’s Soul.

The clip starts with Lorraine sitting with Annabelle while Ed is trying to fix their car. However, things take a scary turn when she sees Ed surrounded by different ghosts. They later have a close call and Lorraine discovers the brain behind these sudden attacks. She calls Annabelle as the beacon of other spirits and how the doll is manipulating others for scary encounters. Annabelle Comes Home to Hit the Indian Screens on June 28.

Check out the new Annabelle clip below

Earlier the makers had introduced Ferryman in the second trailer and his presence was spine-chilling. While the doll will continue to be the main antagonist in this sequel, she'll be aided by other evil spirits. The premise for this new sequel will be highly entertaining as the Warrens are fighting for their own existence this time. Things are complicated and terrifying after her arrival and we are getting impatient to watch it on the big screen.

(The above story first appeared on LatestLY on Jun 11, 2019 10:55 AM IST. For more news and updates on politics, world, sports, entertainment and lifestyle, log on to our website latestly.com).