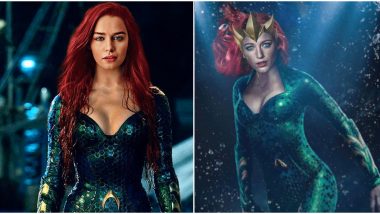 There has been a lot of talk about Amber Heard being replaced in Aquaman 2 since a while now. Heard's personal life controversy involving the defamation case with ex-husband Johnny Depp seems to be causing trouble for the actress professionally. If recent reports are to go by, Heard's role in DC's Aquaman sequel may be in trouble. After starring in the first film as Mera alongside Jason Momoa, fans have been calling for the actress' removal from the film ever since allegations of abuse caused by her towards ex-husband Johnny Depp have hit the news. Aquaman 2: Is Amber Heard Getting Replaced from the DC Film Due to Johnny Depp Controversy?

Several reports also claimed that Game Of Thrones star Emilia Clarke was in talks for this role. Given Clarke and Jason Momoa's closeness ever since the duo worked on GOT together, there were reports of her casting. Although a recent fan art showed how Gossip Girl fame Blake Lively too would be a great choice for this role and if anyone is unconvinced, the fan art sure shows how gorgeous she would look in that role. A petition exists asking the makers to replace Heard with Emilia Clarke in the film but it seems after seeing this Blake Lively fan art, there could be a new petition being filed soon. Aquaman 2, The Suicide Squad or Shazam 2 - Which DCEU Film Will We See Henry Cavill's Superman Cameo in?

Check Out the Fan Art Showing Blake Lively as Mera:

Take a look at these 2 amazing pieces of fanart that show what #EmiliaClarke and/ or #BlakeLively would look like if cast as #Mera in #Aquaman2. these artworks r incredible and they help show that either 1 of these actresses would be great in the role #RecastMera #FireAmberHeard pic.twitter.com/Tvk8fakX2z

Given how amazing both Emilia Clarke and Blake Lively are in their own right, it certainly seems like a tough choice for fans. We have seen pictures of both the actresses in Mera's avatar and it seems almost impossible to say who suits this role better. While we can't pick between these gorgeous ladies, we'd love to see what you think about this casting! Vote now!

Blake Lively or Emilia Clarke: Who Would You Pick to Play Mera in Aquaman 2

(The above story first appeared on LatestLY on Jun 10, 2020 05:50 PM IST. For more news and updates on politics, world, sports, entertainment and lifestyle, log on to our website latestly.com).