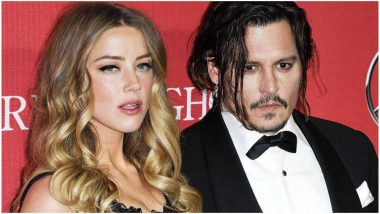 Johnny Depp and Amber Heard's divorce settlement might be over but she's not done yet. The Aquaman actress is still terrified to reveal details of her horrific journey with Depp and how he had an alter ego which they would call 'Monster'. The alter ego would emerge when the actor would beat his actress wife and she was petrified of it. The claim is a part of 471-page deposition that reveals new details from the couple’s divorce proceedings, which started in 2016. In the same documents, Heard alleges that during an altercation at their Los Angeles home, he threw a phone at her, as hard as he could and it hit her badly on the face. Amber Heard Talks About Being Domestic Abuse Survivor.

Pictures of Heard with visible injury marks on her face and leaked text conversations about the alleged assault were posted online. However, as per a report by the Hollywood Reporter, Depp's legal team has evidence that she faked her injuries and Depp might sue her for the same. The Pirates of the Caribbean actor has filed a defamation suit against British Tabloid, The Sun defamation suit filed by Depp against British tabloid The Sun, when they had published a story in 2018 titled, How can JK Rowling be ‘genuinely happy’ casting wife-beater Johnny Depp in the new Fantastic Beasts film? Johnny Depp Approves Of Daughter Lily-Rose Depp Dating 'Call Me By Your Name' Actor Timothee Chalamet!

If Amber decides to testify in The Sun's favour, Depp might sue her.  As part of their divorce settlement, the couple agreed not to make disparaging remarks against one another. We wait to see if her recent statement provokes Depp and his lawyers in any way. The star recently made headlines when Disney decided to drop him from the Pirates of the Caribbean franchise.

(The above story first appeared on LatestLY on Jan 07, 2019 04:22 PM IST. For more news and updates on politics, world, sports, entertainment and lifestyle, log on to our website latestly.com).