Billboard Music Awards 2021: Date, Time, Where to Watch – All You Need To Know About the Gala Night!

Billboard Music Awards 2021 are fast approaching. But in case, you don't know how and where to watch the event, fret not, as we have the answers. So, here's all you need to know about the awards show. 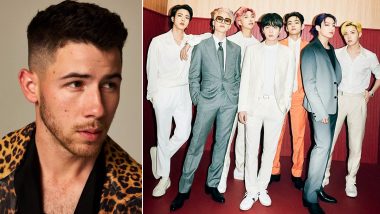 Billboard Music Awards 2021 are almost here! 2020 and the ongoing 2021 have been tough for one and all, courtesy of the pandemic, and so owing to the same some entertainment is all we need in life. Having said that, in just a few hours, all the top musicians from Hollywood will be gathering under one roof to celebrate some chartbuster hits. Of course, a lot can be expected from the gala night like the red carpet moments, some extravagant performances, Jonas Brothers, and more. But in case, you don't know how and where to watch Billboard Music Awards, fret not, as we have the answers. So, here's all you need to know about the awards below. BLACKPINK Gets Nominated for Billboard Music Awards 2021 ‘Top Social Artist,’ Becomes First K-Pop Girl Group to Earn BBMAs Nomination! BLINKs Celebrate on Twitter.

The host this year is gonna be none other than the Sucker singer, Nick Jonas. After three years of hosting, Kelly Clarkson has passed the duties to star Nick, who will go live from LA. Even, Priyanka Chopra Jonas will be seen as a presenter.

Where Are The Awards Held This Year?

Considering the current scenario, the 2021 awards ceremony will go live from the Microsoft Theater in Los Angeles.

How to Watch The Awards?

While Billboard Music Awards 2021 is all set to air on NBC, it also will stream on several live TV platforms, including Sling TV, fuboTV, Hulu With Live TV, AT&T TV, and YouTube TV. You can also watch the show on May 24 after signing up on Peacock.

The major highlight from the night is going to be Duran Duran who will mark BBMAs debut with a remote performance in London, England. Along with this, we have BTS (they can perform Butter), Pink, The Weekend, Twenty-One Pilots, Jimmy Jam & Terry Lewis, and more on the list.

That's it, guys! These might be the top questions on your mind before tuning into the Billboards. Considering the list of nominees this year, chances are that Canadian singer The Weekend can win more awards as he has 16 nominations. Also, Drake is gonna get awarded the Artist of the Decade Award and Pink is getting the Icon Award at the show. Stay tuned.

(The above story first appeared on LatestLY on May 23, 2021 03:34 PM IST. For more news and updates on politics, world, sports, entertainment and lifestyle, log on to our website latestly.com).