Italian fashion designer Donatella Versace, who is Britney Spears' close friend, has revealed that the Princess of Pop is currently witnessing a happy phase 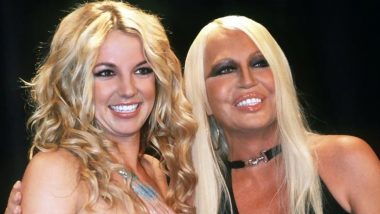 As per 'Variety', Donatella was recently in Los Angeles for the Oscars, attending the Elton John AIDS Foundation Academy Awards gala and the Vanity Fair party. She also caught up with her friend Britney Spears. Versace is designing a wedding dress for the newly liberated pop princess. Britney Spears Opens Up About Getting Breast Enhancement Surgery After Weight Loss.

The fashion designer told 'Variety' at the Vanity Fair bash, "She's (Britney) on vacation now. She's doing well. I find her in an amazing state of mind. I know it's been such a long time. I'm very happy to see her like that."

(The above story first appeared on LatestLY on Apr 06, 2022 05:16 PM IST. For more news and updates on politics, world, sports, entertainment and lifestyle, log on to our website latestly.com).