Captain America To Return to MCU? Chris Evans’ Cryptic Tweet Shoots Down Rumours of His Return to the Marvel Franchise!

If the talks are indeed positive and Evans' return is confirmed, reports claim that it was not going to be for solo movie. He could be seen in the same supporting capacity as Robert Downey Jr has been used since his solo lead effort in Iron Man 3. 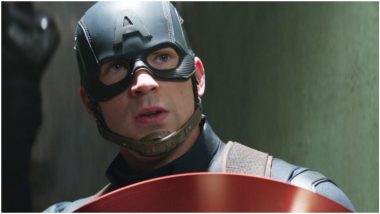 There have been murmurs that Marvel Studios are in fervent discussions with Chris Evans to make him return to Marvel Cinematic Universe, reprising his role of Captain America aka Steve Rogers. As per an exclusive report in Deadline, the negotiations have gone well and that we can Evans stride in in his star-spangled uniform any time soon. However, Marvel has chosen not to offer any statement on this development, at the time of writing this article. Captain America Is All Set to Make a Return to the MCU? Chris Evan in Talks With Marvel for Another Superhero Movie.

However, Chris Evans, in a tweet, most likely reacting to this news, seems to be oblivious to such talks. He tweeted, 'News to me'. Pretty sure, after the actor has tweeted this, all Marvel fans, especially Captain America admirers would have sighed disappointment.

To the disappointed, we have to say, don't lose hope! Actors tend to deny their involvement in big projects unless the studios announce themselves. Recently Mads Mikkelsen has initially denied he is replacing Johnny Depp as Grindelwald in the Fantastic Beasts franchise, before the studio confirmed his casting. So there, we could still have a chance here for Cap to return!

The last we saw him in MCU, it was in the finale of Avengers: Endgame. After Tony Stark's funeral, Steve Rogers goes back in time to return the six Infinity Stones in their rightful places. However, he chooses not to return and decides to be with his first love Peggy Carter and grow old with her, We later see a geriatric Steve Rogers meeting Sam Wilson aka Falcon and giving him his old shield. That scene felt like the retiring moment for the character, and in Spider-Man: Far From Home, he is considered among characters thought to be dead, along with Vision, Black Widow and Iron Man. WandaVision Review: A Terrific Elizabeth Olsen Owns The Show in Marvel Cinematic Universe’s Weirdest Offering Since Doctor Strange.

Watch the final scene of Captain America in Avengers: Endgame:

If the talks are indeed positive and Evans' return is confirmed, reports claim that it was not going to be for solo movie. He could be seen in the same supporting capacity as Robert Downey Jr has been used since his solo lead effort in Iron Man 3. Watch this space for more update on this development.

(The above story first appeared on LatestLY on Jan 15, 2021 11:38 AM IST. For more news and updates on politics, world, sports, entertainment and lifestyle, log on to our website latestly.com).