WandaVision is Marvel Cinematic Universe's first series in their Disney+ Slate. It is also their first offering in Phase 4, since Black Widow got delayed due to pandemic. Elizabeth Olsen and Paul Bettany reprise their roles of Wanda Maximoff and Vision from the franchise. In India, the series will stream from Disney+ Hotstar. 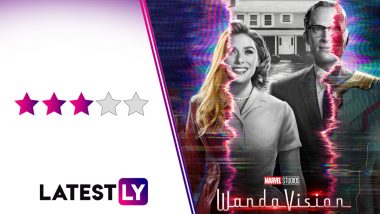 WandaVision Review: After skipping an entire year - a first for Marvel Cinematic Universe since its birth in 2008 - we now have a new MCU offering that has comes straight to our living rooms. WandaVision, the first series in MCU's Disney+ slate, is a welcome sight for Marvel fans. But what I saw in the first three episodes of the series is something that's a very daring experiment - bold, game-changing and yet very divisive. With WandaVision, Marvel is certainly realigning fans' expectations of what to expect from the future of the franchise, ever since Tony Stark reversed the Snap (at the cost of his life). WandaVision Early Reviews: Elizabeth Olsen’s Miniseries Is Taking MCU Places It Has Never Gone Before, Say Fans.

Vision (Paul Bettany) might have remained dead at the end of Avengers: Endgame, but we now see him hale and hearty as the star of a black-n-white '50s sitcom WandaVision. Playing his wife is his bereaved lover, Wanda Maximoff aka Scarlet Witch (Elizabeth Olsen), as they play an suburban couple who try to hide from their neighbours and colleagues that they are android and a witch.

Their attempts to do so raise sitcom gags, helped by canned laughter from live audience. Of course, nothing is what it seems, as soon we dawn into the colourised '60s, while modern times threatens to creep in whatever 'reality' Wanda has cooked up. Or maybe, her nosy neighbour Agnes (Kathryn Hahn) has something to do with it.

WandaVision is partly based on the popular Marvel comic-line, House of M, that was about Wanda creating a whole new reality to cope over Vision's death, in which she is happily married to the android and they have twins. Some of the elements have been retained in the series, like the marriage and the birth of the kids. But the TV sitcom setup is something different that that WandaVision tries, though how that experiment has worked out for the show is something I can only tell once I see for the rest of the episodes.

As for the initial episodes, have to say that I had a little difficulty in adjusting to the bizarre concept, especially in the first episode. The sitcom gags aren't exactly hilarious, as I was fervently for the curtain to fall and reveal the real scenery. By the time, WandaVision reaches the second episode, I had warmed up to the setting that pays rich tributes to some iconic shows of the yore like I Dream of Jeannie, Sabrina or Bewitched. Full marks have to be given to the creative team to do a successful recreation of television's classic era, and the added presence of popular sitcom stars Debra Jo Rupp and Fred Melamed makes the concept more appealing. Though once again I reiterate, how successful the idea is, I can only say after seeing the other three episodes. In my personal opinion, Disney should have released all the six episodes together, instead of installments. The present formula would work best on The Mandalorian, their biggest hit on the platform, as it follows a more episodic formula. In the case of WandaVision, while it is episodic, my interest was more on the overlying sense of suspense around the plot. But then, that's my opinion.

Thankfully, I also found the antics of its lead characters to be quite enjoyable. Bettany and Olsen share a warm chemistry, with Olsen giving a really fine performance as the sitcom housewife. This is the first time she gets most of the spotlight in the MCU, and the actress just relishes the opportunity, with Bettany giving able support.

The second episode ends with some interesting twists and turns, and the third episode, the most interesting of the lot, gets even better as we enter the colour era. While I won't divulge any further information for SPOILER reasons, I can say that the mystery deepens, we get to see more of Geraldine (Teyonah Parris), the mysterious neighbour we know is Monica Rambeau, the daughter of Captain Marvel's BFF. And the conclusion to this episode is just terrific! WandaVision Trailer: Did You Notice This Captain Marvel Character in the First Promo of MCU's Disney+ Hotstar Series?

Keep your eyes peeled and you can catch quite a few Easter eggs from MCU, as well as the occasional references to SWORD, a mysterious organisation, that could be the new SHIELD. All in all, the end of the third episode did raise the level of excitement high for me.

- Takes Time to Settle In

Definitely MCU's weirdest offering after Doctor Strange, WandaVision can be considered as one of the franchise boldest attempts at storytelling, helped by the freedom the small screen offers. While it is still early to call the experiment a success, WandaVision is boosted by Olsen and Bettany's enthusiastic performances and its enjoyable tributes to sitcom tropes. The first two episodes of WandaVision land on January 15 on Disney+ Hotstar in India, while the third episode arrives on January 22.

(The above story first appeared on LatestLY on Jan 14, 2021 10:30 PM IST. For more news and updates on politics, world, sports, entertainment and lifestyle, log on to our website latestly.com).