Starring in movies like 21 Jump Street, The Lost City and Logan Lucky, Tatum definitely was one of the best parts of those films and brought a great humourous tone to them. So to celebrate Channing Tatum’s 42nd birthday, let’s take a look at five of his funniest roles. 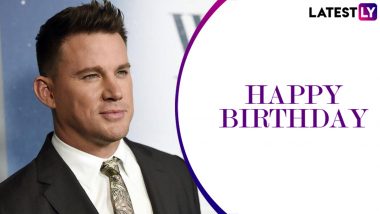 Channing Tatum has become one of the most funniest actor’s in Hollywood in the last few years. Releasing some absolutely funny and entertaining films, Tatum in a way reinvigorated his career. Originally starting out with Step Up, Tatum would then court his eyes towards action, only for it to not work out with the GI Joe films. He would then go on to find success in comedy, and has really transformed himself into an actor that you should be definitely on the lookout for. Dog Movie Review: Channing Tatum’s Road Trip Film is a Heartwarming Journey That Any Dog Lover Will Enjoy! (LatestLY Exclusive).

Starring in movies like 21 Jump Street, The Lost City and Logan Lucky, Tatum definitely was one of the best parts of those films and brought a great humourous tone to them. So to celebrate Channing Tatum’s 42nd birthday, let’s take a look at five of his funniest roles. The Lost City Movie Review: Sandra Bullock and Channing Tatum’s Movie is a Fun Throwback to ‘90s Adventure Films! (LatestLY Exclusive).

In a film as stacked as Hail, Caesar!, Tatum still managed to steal the scenes he was in. Playing the role of Burt Gurney, Tatum makes sure to make the best of the little screen time he has and puts a hilarious performance.

Where to start with this one. Tatum completely nails the role of a George Washington in this animated parody. While some may find this over-the-top, it nails the meta-humour of today’s America and just presents for a riot of a film.

Although not inherently a comedy role, Tatum still manages to give out a few laughs here, and those are really good. With Logan Lucky, Tatum plays the role of Adam Driver’s Clyde Logan, both are brothers and are planning a heist.

The Lost City saw Tatum make a comeback to the comedic scene and it was an absolute riot. His chemistry with Sandra Bullock here is the best part of the film, and he has some of the best laughs over here. Playing the role of Alan Caprison, a cover model for a book was never this funny.

These are by far Tatum’s best roles. Both the movies saw Tatum at his best as he shared the screen with Jonah Hill, in what is one of the best modern movie duos in Hollywood. Playing the role of an undercover cop, Greg Jenko is someone that you definitely need as your best friend.

With Tatum having two really fun movies come out this year, we can’t wait to see what he does next. With this we finish off the list and wish Channing Tatum a very happy birthday.

(The above story first appeared on LatestLY on Apr 26, 2022 09:21 AM IST. For more news and updates on politics, world, sports, entertainment and lifestyle, log on to our website latestly.com).