As per latest updates, the release dates of Christopher Nolan’s Tenet and Gal Gadot starrer Wonder Woman 1984 have also been pushed back. 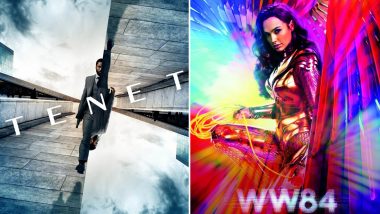 There are several films across industries that had to be postponed owing to the coronavirus outbreak. The cinema halls were closed in order to avoid mass gatherings and curb the further spread of COVID-19. The films that were scheduled to be released during the time of summer or mid of this year had to be postponed. Several shootings had to be suspended and that also became one of the reasons for the delay in meeting the deadline and release the film as per the schedule. As per latest updates, the release dates of Christopher Nolan’s Tenet and Gal Gadot starrer Wonder Woman 1984 have also been pushed back. Marvel Phase 4: Black Widow, The Eternals, Captain Marvel 2 – Here Are the New Release Dates of MCU Movies Set to Be Released from 2020 Through 2022!

Tenet stars John David Washington, Robert Pattinson, Elizabeth Debicki, Dimple Kapadia, Michael Caine, and Kenneth Branagh in the lead. The makers had initially planned to release the film on July 17, but now it has been postponed by two weeks. This big budget film will now hit the theatres on July 31. About it Warner Bros Picture Group Chairman Toby Emmerich said in a statement, “We’re especially thrilled, in this complex and rapidly changing environment, to be bringing Christopher Nolan's Tenet, a global tentpole of jaw-dropping size, scope and scale, to theaters around the world on July 31.” Greyhound: Tom Hanks’ World War Drama to Premiere on Apple TV Plus on July 10.

Besides Tenet, Patty Jenkins’ directorial Wonder Woman 1984 starring Gal Gadot in the lead has been postponed to October 2. The film was first set to be released in June, but due to the ongoing global crisis  the makers decided to push it to August 14 and now again for the third time it has been postponed. The official Twitter page of Woman Woman shared a few pics and mentioned in its post, “Wonder Woman 1984 is coming to your favorite theater this fall. See it October 2, 2020”.

(The above story first appeared on LatestLY on Jun 13, 2020 10:04 AM IST. For more news and updates on politics, world, sports, entertainment and lifestyle, log on to our website latestly.com).