Early Oscars Shortlists Out! No Time to Die, Dune Lead Mentions for the 94th Oscars; Final Nominations Yet to Be Announced 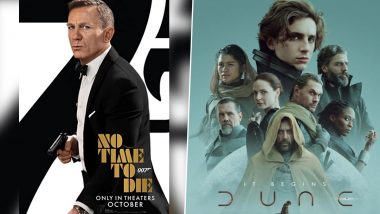 The 25th James Bond film, 'No Time to Die', made a strong showing at the shortlists released on Tuesday for the 94th Oscars, with mentions in five categories such as Song, Score, Sound, Visual Effects, Make-up and Hairstyling to lead all films. 'Dune', with four mentions in the same categories except Song was close behind, reports deadline.com. 94th Academy Awards: Koozhangal, India’s Official Entry, Out Of Oscars 2022 Race; Film’s Producer Vignesh Shivan Reacts.

It is also eligible for Animated Feature (not a shortlisted category) this year, and should it eventually score final nominations in all three categories, it will set an Oscar record for that triple play, reports deadline.com. Although there weren't many surprises this morning, for some the most shocking omission will likely be in International Feature, where French entry and Cannes Film Festival Palme d'Or winner 'Titane' from Director Julia Ducournau missed the cut after she became only the second woman ever (after Jane Campion) to win the Palme.

It would be interesting to see how many voters got past that beginning for the critically praised Berlin winner. In terms of multiple mentions, which bode well for eventual nominations in other categories as well, the aforementioned Campion's 'The Power of the Dog' has three, and such big blockbuster titles like 'Spider Man: No Way Home' and 'The Matrix: Resurrections' are among those with two. It is a big day for Billie Eilish, who is the subject of a feature documentary that made the cut, as well as co-writer and singer of the shortlisted title song of 'No Time to Die'.

In the latter category there are some big names competing for one of the five eventual slots, including Brian Wilson, Beyonce, Jay-Z, Sparks, Arianda Grande, Bono, Lin-Manuel Miranda, Jennifer Hudson, Carole King and perennial bridesmaid Diane Warren eligible to grab her 13th nomination in the category for 'Somehow You Do' from the little-seen 'Four Good Days'. Final nominations will be announced on February 8. The Oscars are scheduled to take place on March 27 at the Dolby Theatre.

(The above story first appeared on LatestLY on Dec 22, 2021 02:35 PM IST. For more news and updates on politics, world, sports, entertainment and lifestyle, log on to our website latestly.com).