Get latest articles and stories on Entertainment at LatestLY. Washington D.C. An ensemble list of actors including Kate Winslet, Jennifer Hudson, and Glenn Close has joined the cast of VR animated film 'Baba Yaga'. 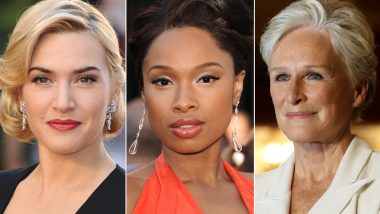 An ensemble list of actors including Kate Winslet, Jennifer Hudson, and Glenn Close has joined the cast of VR animated film 'Baba Yaga'. 'Star Wars' actor Daisy Ridley has already been announced as the main lead of the flick, which will make its world premiere at the Venice Film Festival, cited Variety. In 'Baby Yaga', the viewers will be the character, who goes to the fairytale world, and their choices could determine the ending of the story. Rachel Weisz to Star In and Produce Dead Ringers TV Adaptation for Amazon

Hudson is also an executive producer on the pic from Baobab Studios, which will make a push for the Oscar for animated short. According to Variety, the enigmatic witch Baba Yaga (Winslet) uses her powers to stop the villagers whose settlement encroaches on her enchanted Forest (Hudson). When the viewer's mother, the Chief (Close), falls deathly ill, it is up to them and their sister Magda (Ridley) to enter the rainforest, uncover its mysteries and get the cure from Baba Yaga. The Henna Artist: Freida Pinto to Star In and Produce TV Adaptation of Alka Joshi’s Bestselling Novel

"While the story is rooted in classic folklore, we were inspired to bring it into modern light by focusing on environmental themes and strong female characters themes the world needs to explore now more than ever," Variety quoted Hudson as saying. The film is executive produced by Hudson, Maureen Fan, Larry Cutler, and Kane Lee. 'Baba Yaga' will be available exclusively on Oculus Quest later this year.