Actor Jude Law feels the departure of actor Johnny Depp from the Fantastic Beasts franchise is unusual, and says the onus of such decisions lies on the studio. "It's an enormous film, and there are many, many layers to it. 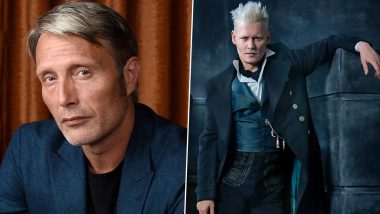 Actor Jude Law feels the departure of actor Johnny Depp from the Fantastic Beasts franchise is unusual, and says the onus of such decisions lies on the studio. "It's an enormous film, and there are many, many layers to it. It's probably one of the biggest productions I've ever worked on," Law told ET. "And in a situation like this, you defer to the studio. That's all you can do. Because you have to turn up and play your part. It was unusual for me because, in fact, on this particular role. Johnny had actually only done a day's filming, I think, on his own," added the star, who essays the role of a young Albus Dumbledore in the Harry Potter spin-off franchise. Jude Law Opens up about Johnny Depp’s Departure from Fantastic Beasts 3

After playing dark wizard Gellert Grindelwald in the first two Fantastic Beasts films, Depp announced that he has been forced to exit the franchise after he lost his case against The Sun that published an article in 2018 alleging he was a "wife beater". "I wish to let you know that I have been asked to resign by Warner Bros. from my role as Grindelwald in 'Fantastic Beasts' and I have respected and agreed to that request. The surreal judgment of the court in the UK will not change my fight to tell the truth and I confirm that I plan to appeal. My resolve remains strong and I intend to prove that the allegations against me are false. My life and career will not be defined by this moment in time," Depp had said in a note he posted on his Instagram account. Fantastic Beasts 3: Mads Mikkelsen in Early Talks to Replace Johnny Depp in Warner Bros Production

The film's production is currently underway, and would not be interrupted by the recasting process. The film is slated to open in 2022. "In a franchise like this, it's the studio and the company that make the big decisions. And you have to go along with those, because we're just a member of the team," Law said. Grindelwald is a dangerous wizard who has a romantic relationship with Dumbledore. The character was also played by Colin Farrell in the 2016 Fantastic Beasts film, with the wizard using another identity in the narrative. He was later revealed as Grindelwald, with Depp taking over the role at the end of the first film in the series. Actor Mads Mikkelsen is in early talks to replace Depp as Grindelwald in the franchise.

(The above story first appeared on LatestLY on Nov 14, 2020 07:15 PM IST. For more news and updates on politics, world, sports, entertainment and lifestyle, log on to our website latestly.com).