We have always seen Ricky Gervais taking potshots at some of the Hollywood stars sitting in the audience. This year, at the 77th Golden Globe Awards, it was no different. He destroyed DiCaprio, Scorsese and others in his opening monologue. 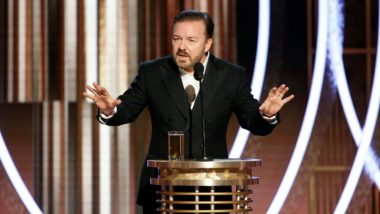 The 77th edition of the Golden Globes Awards is currently underway. True to his reputation, Ricky Gervais, who returned to host the ceremony for the third time opened the show with some of the best jokes that were induced in his monologue.  We have always seen him taking potshots at some of the Hollywood stars sitting in the audience. This year, it was no different. He pretended to confuse Joe Pesci for Baby Yoda, made a funny remark on Leonardo Di Caprio's dating life, called the Hollywood Foreign Press Association racist and whatnot.

“So if you do win an award tonight, don’t use it as a platform to make a political speech, right? You’re in no position to lecture the public about anything. You know nothing about the real world. Most of you spent less time in school than Greta Thunberg. If you win, come up, accept your little award, thank your agent and your god, and f— off,” he told the starry crowd at Beverly Hilton in Beverly Hills, Los Angeles. Golden Globes 2020 Winners List Live: The Irishman, Joker, Fleabag, Marriage Story, Chernobyl – Here’s Look at the Big Winners of 77th Annual Golden Globe Awards.

Of course, a huge set of people are going nuts on social media after watching Ricky's monologue. Check out some of the best reactions by the viewers of Golden Globes 2020 right here:

Wow #RickyGervais actually surprised me with his monologue. “If you win an award don’t make your little political speech. No one cares. You know nothing. Say thank you to your agent and get the “F” off stage”. #GoldenGlobes2020

#RickyGervais opening monologue at the #GoldenGlobes.🔥🔥🔥

“You say you're woke but the companies you work for unbelievable, Apple, Amazon, Disney; if ISIS started a streaming service you'd all call your agent...you're in no position to lecture the public about anything."

This is the most savage 1 minute speech you will ever hear in your entire life.

It is delivered directly to the faces of the hypocrite Hollywood celebrities it brutally & honestly targets.

In an interview with E! at the Red Carpet of Golden Globes 2020, Ricky revealed that his Golden Globes jokes get a run-through with his partner Jane Fallon, who tries to tone them down. “A couple of times I’ve said, ‘Nope, please don’t,'” Jane told co-host Ryan Seacrest at the red carpet. “That’s what she says — she says, ‘Please don’t,'” Ricky replied to that. “She uses emotional blackmail,” he further added. Well, going by the monologue of Gervais at the 77th Golden Globe Awards, looks like Fallon forgot to tone the jokes down this time. They were savage, we have to admit.

(The above story first appeared on LatestLY on Jan 06, 2020 07:49 AM IST. For more news and updates on politics, world, sports, entertainment and lifestyle, log on to our website latestly.com).