Halloween reboot is basically Home Alone for adults. Oops, hope no spoilers are out with that sentence. 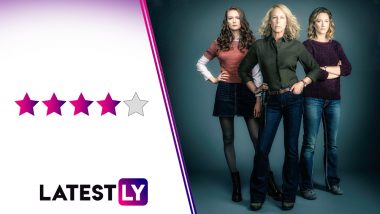 Halloween reboot is basically Home Alone for adults. Oops, hope no spoilers are out with that sentence. 16 years after posing as Laurie Strode, Jamie Lee Curtis decides to take on the role, one last time (or so she hopes) and surpasses all expectations! Slasher movies have become a thing of the past as I can't recall the last slasher movie I saw that didn't include me sitting on my bed munching on nachos. Thanks to director David Gordon Green who is famous for Pineapple Express and Stronger, to have brought back one slasher movie for this Halloween!

As a tribute to the original slasher movie enigma, John Carpenter, David Gordon Green keeps all the elements of gore and horror intact and rather makes it a better end to the franchise. The story goes back to Jamie Lee Curtis as Laurie Strode, who has been training herself and her Home Alone-inspired house for the past few years to be prepared for when her arch nemesis Michael Myers is released from the asylum. Set to Haddonfield, Illinois, Strode continues with her paranoia while her daughter Karen (Judy Greer) has mostly disowned her. But not Strode's granddaughter Allyson (Andi Matichak). No, she's quite crazy about her grandmother, even though she notices and is later told by Karen that Laurie is basically a lost cause.

But as every slasher movie goes, the boogeyman does return. And Myers returns with a manic prow as he simply heads in the direction of weapons found in the vicinity. Imagine, a serial killer loose, who is just walking the streets with a mask on his head during Halloween, killing every being in his way and changing his weapons with every kill. That's how wicked Green makes Myers. Michael's character has only one direction, "kill". The symbolism of keeping his real face behind a mask is hauntingly brilliant as the boogeyman never show their face but creep up from under the bed.

Laurie creates a Michael Myers-proof household which has been creatively designed and is probably inspired by Home Alone's mad-house. What makes the film pop from the other films in the Halloween franchise is the simple story, a lot of blood and carnage, a treat to those who have missed slasher films and no absurd theory.  The background score is chilling even though it is a rendition of the same tracks used in the first Halloween film!

- The notable gore and guts executed to honour the slasher genre.

- Creative use of tracks from the previous Halloween movies.

- Easter eggs and inside jokes from the franchise (you'll only get it if you've watched all the parts!)

- Underlying comedy that eases the splatter of carnage on the screen.

- Quite a few empty and hollow moments during the course of 106 minutes.

- Whatever happened to Allyson's boyfriend.

Go. Watch it! You won't get such a mindblowing slasher movie for the next 16 years! Also, it glorifies Halloween to it's prime so yes, we highly recommend this movie for those who don't mind a psycho killer on a killing spree, breaking bones, splattering brains and trying to kill the protagonist. Oh and don't miss the post-credits. It has a bit of Darth-Vaderish eeriness.

(The above story first appeared on LatestLY on Oct 24, 2018 08:00 AM IST. For more news and updates on politics, world, sports, entertainment and lifestyle, log on to our website latestly.com).