The little angel has been named Willa, and many including us are trying to figure out the meaning behind the name. Well, some people did find a possible meaning. Read on to know why Joe and Sophie named their bundle of joy Willa. 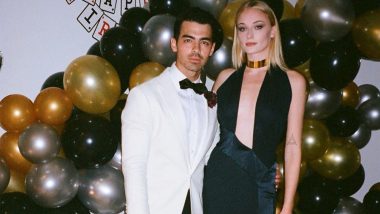 It's a happy time for Sophie Turner and Joe Jonas as the couple has welcomed a baby girl into this world. Needless to say, not only them, but their family members, friends and the legion of fans are super excited too. The little angel has been named Willa, and many including us are trying to figure out the meaning behind the name. Well, some people did find a possible meaning. “The name Willa means Feminine Form Of Will and is of American origin,” HollywoodLife quoted BabyNames.com in their recent report. In the same report, the entertainment portal also revealed that "Sophie’s brother is named Will, — therefore, the couple could have honored her sibling with their daughter’s reported name." The meaning behind Willa is best known to Sophie and Joe obviously, but we definitely love that name!

The couple announced the arrival of their bundle of joy on July 22. “Sophie Turner and Joe Jonas are delighted to announce the birth of their baby,” a rep of the couple said in an official statement. All other details are being kept under the wraps by them. We know that Sophie and Joe have been very private about their personal lives. In fact, they never even publicly acknowledged that they were expecting. It was when Sophie and Joe were spotted shopping for kids clothes at a store in Studio City, California, in March this year that the buzz about her pregnancy began. As weeks passed, Sophie's baby bump started showing in the pictures, and that was an obvious confirmation for everyone. However, neither the couple, nor their family members acknowledged the pregnancy. Interestingly, Joe's brothers, Kevin and Nick have posted nothing about the birth of their niece on social media. Parents Sophie Turner-Joe Jonas Are on a FaceTime and Texting Spree To Show Off Their Baby Girl Willa To Friends!

Happiness begins with you, bub 🌹

The Game Of Thrones actress and the singer did the same when they got married. It was a big surprise for everyone as they exchanged the wedding vows out of nowhere in Las Vegas on May 1 last year.  They tied the knot directly after attending the 2019 Billboard Music Awards at the famous Little White Chapel in Sin City. It was DJ Diplo, who made the news public after he live-streamed the ceremony on his Instagram account. Joe and Sophie had an official ceremony in France that was attended by family members and close friends.

(The above story first appeared on LatestLY on Jul 29, 2020 12:25 PM IST. For more news and updates on politics, world, sports, entertainment and lifestyle, log on to our website latestly.com).