Ben Affleck and Jennifer Lopez are not just spending quality time together as a couple but are also bonding as a family. On Friday, the couple was spotted walking around Hollywood's Universal Studios with their children. 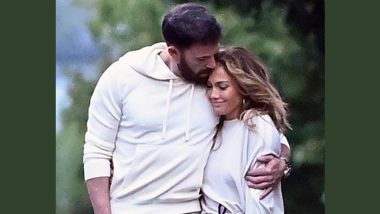 Washington [US], July 4 (ANI): Hollywood stars Ben Affleck and Jennifer Lopez are not just spending quality time together as a couple but are also bonding as a family. On Friday, the couple was spotted walking around Hollywood's Universal Studios with their children, as per photos published by Page Six.

Lopez was dressed casually in a white tank top, baggy pants and sneakers, brought along twins Max and Emme, 13, whom she shares with ex-husband Marc Anthony.

Meanwhile, Affleck donned a hoodie and jeans, and was seen with 9-year-old son Samuel beside him. He shares his son as well as daughters Seraphina and Violet with ex-wife Jennifer Garner. Last month, a source had told People magazine that Affleck was getting to know Lopez's twins and that they are "onboard with starting fresh in Los Angeles," where he lives.

"They are slowly getting to know Ben. Everything seems to be running smoothly. It's very obvious that Jennifer is serious about Ben. She hasn't looked this happy for a long time," the source said. Another insider recently told that Affleck and Lopez, 51 were "very affectionate" with each other during a family dinner together with Max and Emme at Nobu in Malibu last month.

Lopez and Affleck were engaged in 2002 and have co-starred in the films Jersey Girl and Gigli.

They postponed their 2003 wedding days before they were set to walk down the aisle before officially splitting by January 2004. Rumours that they had reignited their early aughts romance first spread in late April when they were spotted outside her L.A. home, following her split from Alex Rodriguez. Since reuniting, the pair have spent time together in Los Angeles as well as in Miami, where Lopez has had her home base.

Last weekend, the pair enjoyed a date night in Beverly Hills, a source told PEOPLE. "They were both in a great mood. Ben always looks very happy when he is with Jen," the insider said. (ANI)