Johnny Depp Loses Libel Case Against a Tabloid That Tagged Him a ‘Wife Beater’, Court Says Accusations Were ‘Substantially True’

On Monday, Hollywood actor Johnny Depp lost a libel lawsuit against British tabloid namely The Sun who had tagged him a 'wife-beater'. The court ruled out that the newspaper's claims were 'substantially true.' Read on. 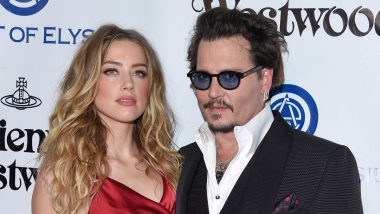 As per latest reports, on Monday, Hollywood actor Johnny Depp lost a libel lawsuit against British tabloid namely The Sun who had tagged him a 'wife-beater'. The court ruled out that the newspaper's claims were 'substantially true.' It was in 2018 when Pirates of the Caribbean and Edward Scissorhands star, Johnny Depp had sued the publication as well one of its writer, Dan Wootton for mentioning in the article that Depp has been violent towards Amber Heard. This particular allegation ruined the star's global image. Amber Heard Wraps Up Testimony in Johnny Depp Libel Trial.

"The claimant [Depp] has not succeeded in his action for libel … The defendants [the Sun and News Group Newspapers] have shown that what they published in the meaning which I have held the words to bear was substantially true," judge Andrew Nicol said while ruling out. He added, “I have reached these conclusions having examined in detail the 14 incidents on which the defendants rely as well as the overarching considerations which the claimant submitted I should take into account. In those circumstances, parliament has said that a defendant has a complete defence.” Johnny Depp's Libel Trial: Lawyers Have Begun Summing Up For the Actor's Legal Battle Against UK Tabloid.

Following the ruling, a spokesperson from the tabloid said, "The Sun has stood up and campaigned for the victims of domestic abuse for over twenty years. Domestic abuse victims must never be silenced and we thank the Judge for his careful consideration and thank Amber Heard for her courage in giving evidence to the court."

In the month of July, a trial had taken place in London, where both Amber and Johnny levelled accusations at each other. Reportedly, Judge Andrew Nicol heard from both the sides about their difficult marriage, alleged affairs, drugs and more. Adding to this, Amber had also detailed out 14 incidents when Depp was violent with her. To which the actor had denied the allegations. Stay tuned!

(The above story first appeared on LatestLY on Nov 02, 2020 06:36 PM IST. For more news and updates on politics, world, sports, entertainment and lifestyle, log on to our website latestly.com).