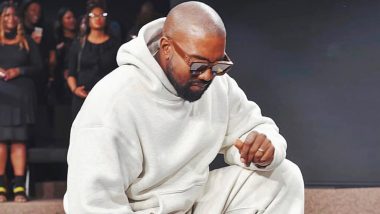 The "Gold digger" hitmaker said: "Playboy was my gateway into full blown pornography addiction. My dad had a Playboy left out at age 5, and it's affected almost every choice I made for the rest of my life. From age 5, to now having to kick the habit. And it just presents itself in the open, like it's OK. And I stand up and say, you know, it's not OK." West shared that God helped him beat the addiction. Kim Kardashian and Kanye West to Move with the Kids to Live in Wyoming?

"With God, I've been able to beat things that had full control of me. That Playboy that I found when I was 5 years old was written all over the moment that I was at the MTV Awards with the Timberlands, the Balmain jeans - before people were rocking Balmain jeans - and the Hennessy bottle," he said, referring to the infamous 2009 MTV Video Music Awards where he interrupted Taylor Swift on stage.

"That was such a script out of a rockstar's life. My mom had passed a year before, and I had said, ‘Some people drown themselves in drugs. And I drown myself in my addiction'," he added.

(The above story first appeared on LatestLY on Oct 25, 2019 05:07 PM IST. For more news and updates on politics, world, sports, entertainment and lifestyle, log on to our website latestly.com).