Kate Winslet Birthday: 5 Best Roles From Her Acting Career That Prove Her Mettle As An Actor

While she continues to excel as an actress with each passing day, there are certain memories and roles of her which will be etched in our hearts forever. Let's have a look at them. 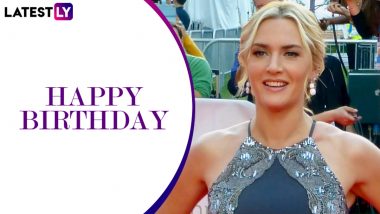 It's quite difficult to describe Kate Winslet in a few words. An enigma of talent that she is, we have seen her growth as an actor and also as a performer. From her pre-Titanic days to her recent being, Mare of Easttown, she has had a fantastic career arch and her ability to shine through these complex characters has only gotten better with time. There's so much to say about her and yet, we often find ourselves hunting for the right words to describe the marvel that she is. Avatar 2: Kate Winslet Recalls Scary Underwater Sequence From the Film That Scared Her to Death.

Kate Winslet can be put in the category of a director's actor who knows what they want her to deliver. She has presented a range of diverse and beautiful yet complicated characters on screen and every time she has successfully nailed them to the hilt. We know Winslet belongs to the league of actors and not stars per se. She has a distinct aura around her as a performer that can feel intimidating at times. While she continues to excel as an actress with each passing day, there are certain memories and roles of her which will be etched in our hearts forever.

On Kate Winslet's birthday today, here's naming some of our favourite performances and roles played by her.

This Disney+ series was essentially a murder mystery and Winslet did a fine job in playing the detective who's tasked to solve the case. While she fights her own personal equations, she also struggles on the professional front but eventually manages to nab the killer. The sincerity which she put in this role was commendable and she truly deserved the Emmy for this one. Mare of Easttown Review: Kate Winslet’s Strong Show Is One Splendid Reason To Watch This Captivating Mystery Drama Series (LatestLY Exclusive).

Eternal Sunshine of the Spotless Mind

Kate Winslet was still getting started in the industry when she managed to blow our mind with her performance in this Michel Gondry directorial. While she was paired opposite the mighty Jim Carrey, she managed to overshadow him in certain scenes and give a beautiful performance that we still can't stop admiring.

Of course, Titanic will forever have a place in our list of best Kate Winslet movies. This James Cameron directorial was b-r-i-l-l-i-a-n-t and her chemistry with Leonardo Di Caprio was outstanding. While the movie gave us some beautiful memories to cherish over, it also gave her a beautiful friendship with Leo that will have a special place in their hearts forever.

The movie that helped Winslet bag an Oscar for the Best Actress! The Reader was painfully beautiful and revolved around Hanna, who can't read. It deals with numerous subjects like adultery, literacy, love, hate, morality etc and ends up triggering those emotional outbursts in you. It also shows us the aftermath of the holocaust and the effects it had on the next German generation.

The ordinary story of a friendship suddenly takes a dark turn when the friends conspire to kill one of the girls' mother. Reason? She starts interfering with their obsessive friendship and wants them to end it.

(The above story first appeared on LatestLY on Oct 05, 2021 09:00 AM IST. For more news and updates on politics, world, sports, entertainment and lifestyle, log on to our website latestly.com).