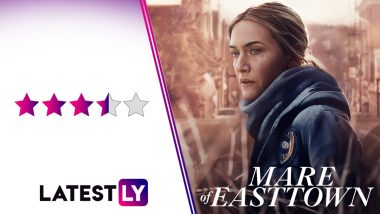 Mare of Easttown Review: In Mare of Easttown, HBO's new series, Kate Winslet plays Mare, a detective in a sleepy American town called Easttown. She and the rest of residents are scandalised by the discovery of the body of a young teenage girl, who is also a single mother. The town has already been troubled by the disappearance of another girl called Hailey a year back, and with this murder happening in their backyard, Mare is put under the scrutiny for her investigation, with the department assigning her a new partner in Colin Zabel (Evan Peters). Kate Winslet's Mare Of East Town Finale Gets A Lot Of Praise From Fans Crashing HBO Max.

While the murder investigation keeps getting complicated, Mare also has to deal with her troubling personal life. A divorcee, she has to see her ex-husband Frank (David Denman) move on in his life and is about to marry another woman. She had already lost her elder son Kevin to suicide, and her relationship with her daughter Siobhan (Angourie Rice) is fractured as a result. She is also about to lose custody of her grandson to the kid's mother, a recovering drug addict.

Things get further complex, when the case she is investigating also spills onto her personal life, and the equations she shared with people in her life and town get transformed for both good and for worse.

At its core, Mare of Easttown is a murder mystery saga, as our complicated protagonist tries to figure out the real killer, shuffling through the limited red herrings in her town, from the victim's ex-boyfriend to the town's parish to her own ex-husband. To be honest, I found the whole mystery angle to be quite predictable, including the reveal of the killer. Which you can also say for the general structure of the whole show. Like you could predict how a character would react at a particular situation and mostly that happens. Like the scene where Mare visits the mother of a person who recently died. You know how the situation would turn out, and that exactly how the scene turns out eventually. Yes, there are some very neat surprises, like how a character who just managed to turn beloved, is snuffed out in a surprise death scene, leaving you shell-shocked. Overall, though, the mystery angle only has a few surprises, at least for me. Mare Of Easttown: Kate Winslet Talks About Her Role of Detective in Upcoming HBO Series.

Still, Craig Zobel (the director of the series) does a really commendable job of keeping the suspense engaging at best, rolling the dice from one person of interest to the next one. But I believe that looking at Mare of Easttown (beautifully shot by Ben Richardson) as just an investigative series is where my outlook about the series would have gone wrong.

The whole murder angle is mostly to serve as a template for the main characters to deal with their inner demons, and that's where lies the strengths of the series. From drug abuse to depression to self-harm, Mare of Easttown's handling of these sensitive issues is simply without fault. While the investigation saga is captivating, I felt more connecting to the bonding moments between the characters, of how Mare and her family are dealing with their trauma. Of the camaraderie between Mare and her mother (a scene-stealing Jean Smart) that oscillates from playful quibbling to genuinse anguish. Or Siobhan dealing with her romantic life while still traumatised by her brother's death. There is Colin who is guilted by something he did in a past case of his, that comes out when he becomes more in awe of his new partner's deduction skills. It is in the interpersonal moments where Mare of Easttown manages to earn our respect for what it has to offer. Which is also what makes the finale such a strong episode to watch, even when, I once again repeat, the outcome may come out as predictable.

The performances also help in tilting the scales in its favour. After FRIENDS the Reunion, I got another Moment of Truth that I have become older seeing Kate play a grandma here, of course, as Guy Pearce's character (who dates her in the show) puts it, a hot one at that. But the actress continues to mesmerise me with the histrionics the same way Kate did the time she didn't share a plank with poor Jack. With a brilliant performance here, Kate proves why she is the best in the business, making what is a very cliched role (how many mystery movies and series have you seen with troubled detectives as leads?) and insert so much flawed humaneness into it.

The supporting cast is excellent, with Smart, Evan Peters, Angourie Rice, James McArdle, Enid Graham being particular standouts. Special mention has to be given to Julianne Nicholson who nearly steals the show from Kate in the finale with what is a terrifically heartbreaking act. That kitchen scene was just deeply moving!

To sum up my feelings about Mare of Easttown, I would say come in for the mystery, stay for the strong, affecting drama and leave blown away by the performances, especially of Kate's and Julianne's. All seven episodes of Mare of Easttown are streaming on Disney+ Hotstar.

(The above story first appeared on LatestLY on Jun 02, 2021 09:04 PM IST. For more news and updates on politics, world, sports, entertainment and lifestyle, log on to our website latestly.com).