Kirsten Dunst Birthday: From Interview With The Vampire, Jumanji To ER, 5 Early Roles of Spiderman's Mary Jane That Wowed Us!

Kirsten Dunst, everyone's favourite Marry Jane, celebrates her birthday today. We decided to take a trip down memory lane to talk about five of her early roles that still leave movie lovers in awe of that little kid. 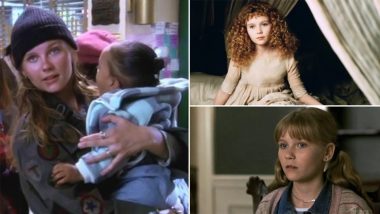 Kirsten Dunst in ER, Interview With The Vampire and Jumanji (Photo credit: Twitter)

Kirsten Dunst is one of those actors who are loved by one and all. She has an amazing fanbase because a lot of people grew up with her. What we are trying to say here is that Dunst was a favourite child actor of many in the Baby Boom generation before she became Spiderman's beloved Marry Jane. We saw her in Jumanji, loved her in Little Women and were surprised to see her in ER. Her performance in Interview With The Vampire is perhaps the most talked-about one ever. Entertainment News | Kirsten Dunst Reveals She’s Pregnant with Second Child, Shows off Baby Bump

So on her birthday today, we decided to take a stroll down the memory lane to revisit the time when Kirsten Dunst was the cutest kid on the screen. Check out five of our favourite little Dunst roles.

Interview With The Vampire: Vampire Chronicles

Dunst's Claudia has been widely praised by critics. It even won her a Golden Globe nomination and she was all of 10 or 11 years old. The emotions she displayed in the movie were simply fascinating to watch.

"and I hate you both" kirsten dunst in Interview with the vampire pic.twitter.com/qIrTLIhHph

Younger Amy March is what Dunst played in yet another book to screen adaptation like Interview With The Vampire. The wily short-tempered little girl who always felt overlooked and sidestepped. Kirsten Dunst Birthday Special: Taking A Look At Some Best Performances By The Actress

Swicord felt empathetic towards Amy March (played by Kirsten Dunst and Samantha Mathis) as a younger sister, and adjusted her character to be a bit more likeable in her screenplay. #BooksOnFilm pic.twitter.com/JAYDJiIC4Z

Who doesn't love this movie? We all hoped to find a game like that and fight monsters for real. Dunst was the voice of reason in the film despite her age. A Robbin Williams movie always moves you and when you have the feisty yet well-meaning Dunst as Judy Shephard, the fun doubles up.

Guys remember Kirsten Dunst aka MJ when she was in Jumanji the original?

She was only 13 in that movie. pic.twitter.com/Rg20OKNkUN

Dunst played Charlie, a homeless kid as a recurring character in several episodes in this George Clooney show. People still go bonkers to realise it was Dunst every time they watch the reruns. It definitely leaves them with a happy smile. Dunst has one of the most cutest baby faces as a kid.

How about Kirsten Dunst as that homeless kid Charlie from ER? pic.twitter.com/h9nHohuBg1

Think Toy Story and now think, everything that can go devastatingly wrong in it. That's how you get Small Soldiers. Dunst was quite interesting in this film.

Soon she grew up and Dunst became Marry Jane, a character we can never forget. Even though we have accepted the rebooted Spiderman series, Tobey Maguire and Dunst's chemistry will still have our hearts.

(The above story first appeared on LatestLY on Apr 30, 2021 09:10 AM IST. For more news and updates on politics, world, sports, entertainment and lifestyle, log on to our website latestly.com).