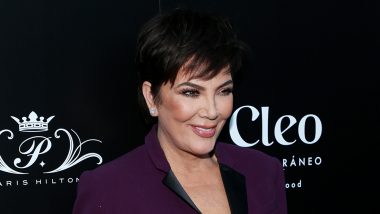 American reality TV star and entrepreneur Kris Jenner recently revealed that she has been writing birthday letters for each of her six children to let them know ' what place they hold in her heart'. People Magazine reported that Kris Jenner recently appeared on the 'At Home with Linda and Drew Scott' podcast show where she revealed that she is bringing back the art of letter-writing after penning a 20-page message to daughter Kim Kardashian for her 40th birthday. Kim Kardashian & Kris Jenner Call out Beauty Guru for His 'TikTok Scam' After His Prank Videos Go Wrong! Here Are All The Stars Who Fell For The Fun Challenge.

"I always thought I would write my kids a letter, but you know, it's really very time-consuming, because I write really long letters, and I hadn't written one in a really long time," the Keeping Up with the Kardashians star said. Kris further recalled that when it was Kim's birthday in October, she wrote her a really beautiful letter about how she feels about her. She also admitted that it took "a couple hours" to write a "20-page long" letter for her. Kris Jenner Birthday Special: Did You Know The Self-Made Businesswoman's Net Worth Is $190 Million?

The momager revealed that she has already written letters for daughters Kourtney Kardashian, Kendall and Kylie Jenner. Her kids Rob and Khloe Kardashian are next at the receiving end of the letters. "I just kind of started with their births, and said this was one of the six greatest days of my life, and kind of the place they hold in my heart and then, I got into the different things in life that have meant so much to me and the special moments that I'll never forget. So that, to me, means everything," she explained.

Recommending the same to others who love out speaking their feelings to their special ones, Kris said, "If I would give anybody any advice, it would be to write a letter to a child or a parent or somebody who's really meant so much in your life, that you just need to get that said, so that they have that." According to People Magazine the 65-year old star is preparing to bid farewell to KUWTK (Keeping Up With The Kardashians', as the family will air their final episode this summer after 14 years and 20 seasons. The finale will be followed by a reunion, which will be hosted by Andy Cohen.