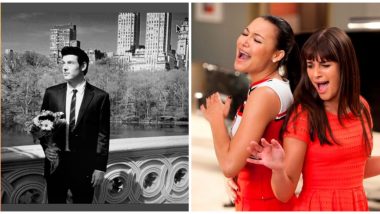 Lea Michele has paid tribute to her late Glee co-stars Naya Rivera and, her ex-boyfriend, Cory Monteith on Instagram. Naya died in a boating accident earlier this week. Her last act was to save her baby from drowning. Cory died in July 2013. According to People magazine, the reason for his death was a result of “mixed drug toxicity” of heroin and alcohol. Demi Lovato Recalls Being Cast as Late Naya Rivera's Love Interest on Glee, Says 'Will Forever Cherish the Opportunity to Play Your Girlfriend'.

Lea posted two black and white pictures of Rivera that will certainly make the Glee fans emotional. For Cory, the actress picked a heartbreakingly beautiful picture: a snapshot of BTS moment of Cory standing in New Central Park, holding a bouquet of flowers. The scene from Glee's season 2 is when Lea and Cory's characters rekindled their romance. Lea had once said that she will show this moment to her kids one day and tell them about Finn and Rachel getting back together. Lea is pregnant with her first child.

Earlier, Lea had deactivated her Twitter account after being incessantly bullied by trolls over Rivera's death. This troll culture needs to change.

"Show some respect. All our energy is going toward helping find Naya and praying for her safe return and for her family," Amber wrote on Sunday. "No one owes anyone online a performance of grief. This is very real and devastating. Focus on Naya and her family. Not us. We don't matter right now."

Another person expressed, "Lea Michele has deactivated her twitter due to be being trolled about Naya Rivera. Has she behaved badly in the past? Yes. She's owned it and is trying to be better. She's also pregnant. Is it her fault that Naya's missing? No. I'm sure she's as upset as the rest of the Glee cast."

On Wednesday, July 8, the Ventura, Calif. authorities confirmed that Naya was missing after her 4-year-old son was found alone on the boat she rented during their Lake Piru outing. On July 13, her body was discovered, in presence of numerous Glee castmates at the lake.

(The above story first appeared on LatestLY on Jul 15, 2020 10:06 PM IST. For more news and updates on politics, world, sports, entertainment and lifestyle, log on to our website latestly.com).