On Nicole Kidman's birthday, we take a look at some of the best performances from her filmography. 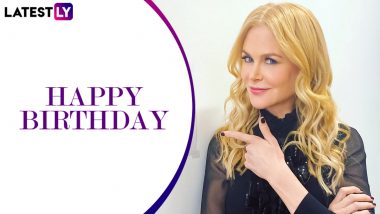 Nicole Kidman celebrates her birthday on June 20. The Aquaman actress is regarded as a gem of Hollywood and has tons of brilliant performances registered under her name. From big-budget movies, theatre to TV shows, Nicole has successfully managed to carve her own path in all the different entertainment industries. An ardent Nicole fan would find it tough to name all her best works and we would be lying if we say the task for easy for us.

But since the day belongs to her and deserves all the celebration from one and all, we decided to personally pick five of her best performances (according to us) and plan a marathon of it. And while these TV series and movies entertained us the most, the rest of the names from her filmography deserve an equal cheer. On that note, let's take a look at five of her career-best performances.

Nicole played a very successful psychiatrist whose life turns upside down when her husband is accused of cheating and murdering. While she struggles with her personal relationships, she's also torn between if she should believe him or not. A fantastic performer that she is, Kidman successfully got us engrossed in her character throughout the storyline and gave one powerful performance.

A doting mother and a wife, who's a victim of domestic abuse - the show presented Kidman with yet another opportunity to shine. We actors like Reese Witherspoon, Meryl Streep and Zoe Kravitz beside her, she still managed to overshadow them in most of her scenes.

In a movie based on the real incident, Bombshell saw a group of journalists accusing the Fox News head of sexual misconduct and a toxic atmosphere. Nicole played the journalist who starts a war against the head honcho and encourages other women to step up. While the role was extremely powerful, Kidman added her own charm to it.

Kidman recently celebrated 20 years of Moulin Rouge. The classic movie shows Nicole as the most popular courtesan who falls in love with a British writer. While this musical had a rather successful run back then, it continues to find admirers even today.

The movie that helped Nicole bag her first Academy Award win in the best actress category. In the movies, she plays the legendary author Virginia Woolf who's struggling to write a novel while also fighting her mental illness and depression. The movie also simultaneously shows two other parallel storylines about women whose lives are getting affected by Woolf's novel. This was yet another brilliant character in her kitty and needless to say, she nailed it to the hilt.

(The above story first appeared on LatestLY on Jun 20, 2021 09:00 AM IST. For more news and updates on politics, world, sports, entertainment and lifestyle, log on to our website latestly.com).