Ocean's 8 Trailer: Can Sandra Bullock and Cate Blanchett Beat George Clooney's Danny Ocean to Pull Off the Best Heist Ever? 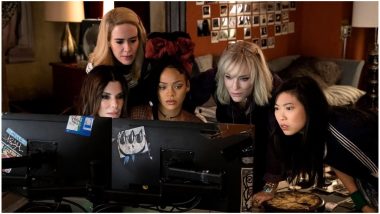 A Still from Ocean's 8 trailer

A decade back, Danny Ocean and his band of boys planned three heists which lead to three enjoyable movies in Steven Soderbergh's emenintely's watchable Ocean's Eleven trilogy. Now in the era of reboots and remakes, we are having a new Ocean's Eleven movie, only this time it will be led by a different ocean, eleven members comes down to eight and they are all females. So yeah, let's welcome Ocean's Eight.

Led by Sandra Bullock and Cate Blanchett, Ocean's Eight also stars Helena Bonham Carter, Mindy Kaling, Sarah Paulson, Awkwafina and Rihanna who play the rest of the team members. In fact, Sandra Bullock is Debbie Ocean, who happens to be Danny Ocean's estranged sister and has her brother's heist-loving tendencies. Anne Hathaway will play their target this time, as the group plans to make big buck stealing from the Met Gala.

The new trailer does show a lot of spunk and some fun camaraderie moments between the team members. Watch it here,

The original Ocean's Eleven trilogy was led by George Clooney, Brad Pitt, Matt Damon along with Andy Garcia, Julia Roberts, Catherine Zeta Jones, Casey Affleck, Carl Reiner and others. It is reported that Matt Damon and Carl Reiner will reprise their roles from the trilogy in the reboot.

(The above story first appeared on LatestLY on Apr 13, 2018 09:33 AM IST. For more news and updates on politics, world, sports, entertainment and lifestyle, log on to our website latestly.com).