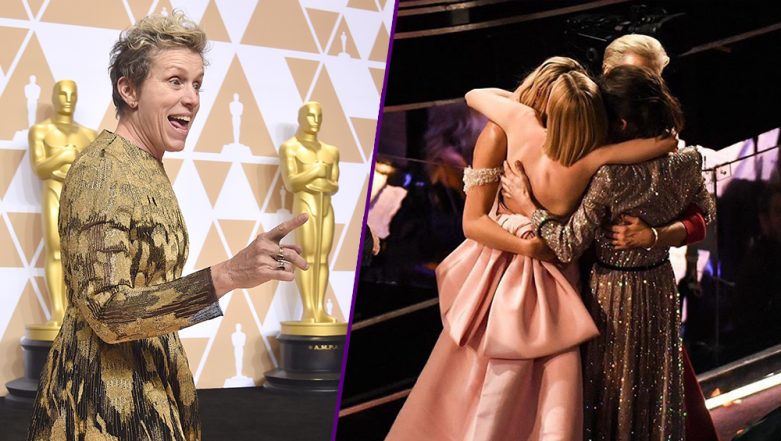 The Oscars 2018 not only showcased the contribution of women to art but was inclusion in all. Along with empowerment for women in the entertainment industry, the Academy Awards also showed how women stand up for each other. If there is a picture that should define the Oscars 2018, then it is this one. A beautiful picture of five leading ladies of Hollywood hugging each standing in a circle is going viral. And the reason why the women showed the love is even more beautiful.

After Frances McDormand won an Oscar for Best Actress and delivered an incredible speech, the losing nominees came together in a bear hug which is sure to go down in the history of Oscars's best moments. Saorise Ronan, Meryl Streep, Margot Robbie, and Sally Hawkins came together for an hugged making for an incredible picture. The photo has gone viral and is heaping praises on social media. Best Actor nominee Timothee Chalamet captured the moment and posted it on Instagram with the caption "Legendz".

Before gathering in each other's arms, Frances paid tributes to her fellow actresses in the middle of her acceptance speech by asking them to stand up for a round of applause. Requesting the nominees to stand up, she said, "And now I want to get some perspective. If I may be so honored as to have all the female nominees nominated in every category stand with me in this room tonight. Meryl, if you do, everyone else will."

Wish our Bollywood can reach here!!! #MerylStreep congratulates #FrancisMcDormand👍...All the nominees for Best Actress together at the #Oscars!!! In our Bollywood awards winner somehow knows in advance and only she comes😛 pic.twitter.com/AEhPrNmSlz

Actual footage of me watching @RealChalamet ‘s insta story of the best actress nominees embracing each other pic.twitter.com/BfEmTc9nc8

Timothée Chalamet instagramming all the Best Actress nominees having a group hug is the Oscars #content we need and deserve pic.twitter.com/MBwC3WJDuL

Yes, let's all take some of it

the best actress losers embracing is the energy I'm taking away from tonight pic.twitter.com/r5oLqn6IGU

Sure to go down in the pages of Oscars' history

Frances McDormand asks all the female nominees in every category to stand up and be recognized #Oscars pic.twitter.com/IB247bZPif

Yes, take me too!

McDormand concluded her speech saying, "And now I want to get some perspective. If I may be so honoured to have all the female nominees in every category stand with me in this room tonight, the actors - Meryl, if you do it, everybody else will, c'mon - the filmmakers, the producers, the directors, the writers, the cinematographer, the composers, the songwriters, the designers. C'mon!"