Pierce Brosnan Backs Female Bond, Says ‘Watched Guys Do It for 40 Years, Get Out of the Way and Put a Woman up There’ 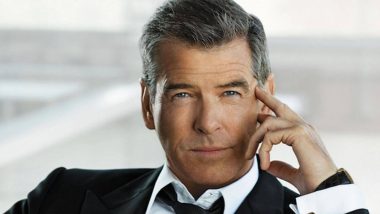 Veteran actor Pierce Brosnan concurs with the idea of a female actor taking over the role of famed fictional British spy James Bond, calling the prospect "exciting". There is a raging debate about who would succeed Daniel Craig, the current Bond star after he leaves the franchise post the release of Cary Fukunaga's "No Time to Die". A strong case has been made by many who want to see a woman actor taking over the mantle. No Time To Die: Daniel Craig’s Upcoming James Bond Movie To Release in April 2020.

In an interview with The Hollywood Reporter, Brosnan, who has four Bond films to his credit, was asked whether he would like to see a gender-flipped 007 spy. "Yes! I think we've watched the guys do it for the last 40 years, get out of the way, guys, and put a woman up there. I think it would be exhilarating, it would be exciting,” the 66-year-old actor said. Oscar Winner Rami Malek On Playing James Bond Villain: ‘He’s a Different Kind of Terrorist’.

He, however, doubts whether the franchise's producers -- Barbara Broccoli and Michael G. Wilson -- would be willing for a gender change to the character.

Brosnan said. The actor also said that in the post #MeToo world, there has to be some changes in how the character is shown on screen. "Without question, yes... The #MeToo movement has been relevant and significant and well needed in our society, so they'll have to address that," Brosnan said.