Rebel Wilson Birthday Special: Five Funny Roles Of The Actress That You Must Know About

Rebel Wilson celebrates her birthday today and so we decided to talk about her many funny roles. From being credited as 'the girl in the alley' in Ghost Rider to being the headliner in Isn't It Romantic? Wilson has done some incredible roles. 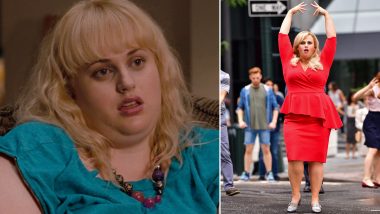 Rebel Wilson is presently being the object of envy for several women who want to shed off extra kilos but are not able to. That also makes her an inspiration for such women. The actress recently lost 30 kgs to fulfill her cheerleading dreams. She gives hope that if you will it, you can do it. That's exactly why she is one of our favourite female comics from Hollywood. Such is her prowess in making people laugh that she transformed beautifully from being 'The girl in the alley' in Ghost Rider (2007) to have a starring role in Isn't It Romantic? (2019).  Rebel Wilson Dishes on ‘interesting’ Ways People Have Treated Her After Weight Loss

On her birthday today, let us tell you a few of the funniest roles of Rebel Wilson that can uplift anybody's mood.

Rebel as Brynn was the obnoxious Mexican roommate of the bride who was a disaster in human form. Such was the impact of her performance that it is said, the actress benefitted more from the movie than anybody in the cast.

Not being subtle there as Rebel is named Fat Amy here. This is one movie that makes everything look good because of the characters in it. Supposed misfits who take over the world, a perfect story of underdogs but this time, it's all women. Rebel played the character so well that for a while we couldn't get over Amy and see her in any other role.

There's definitely no gain for a female actress in a movie about high-on adrenaline men. Stereotypes reign supreme here but Variety's review of the movie lauded Wilson for being a scene-stealer despite playing a typical dim-witted nurse role.

Robin - How To Be Single

Wilson here makes you wonder why don't we have a workplace buddy like her in our life? Someone who can teach the broken-hearted woman why being single is not just a status but a fantastic way of life. All this while being rip-roaringly funny!

The movie may not be upto Wilson's talent but it does revolve around her, making it a great watch. She is funny, stylish, some more funny, fashionable and then funny again.

(The above story first appeared on LatestLY on Mar 02, 2021 09:50 AM IST. For more news and updates on politics, world, sports, entertainment and lifestyle, log on to our website latestly.com).