Space Jam: A New Legacy - Early Reviews Call It Better Than The Original But Product Placements Mire The Experience

Space Jam: A New Legacy had a premiere recently organised by Warner Bros. A few reviews have thus trickled in which cautiously praised the movie calling it better than the original Michael Jordan film but product placements mired the experience. 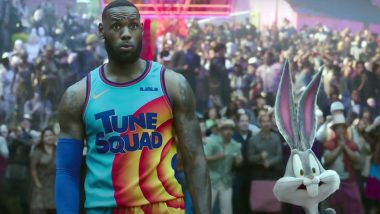 Space Jame: A New Legacy is a live-action comedy that brings back the Looney Tunes. While the original had the basketball god Michael Jordan in the 90s, the new film has LeBron James doing the honours. The film is set to release on July 16 but a few reviews are already in after a premiere was held by Warner Bros recently. Check them out here... Space Jam: A New Legacy Trailer – Looney Tunes Return With NBA Champion LeBron James In The Sequel To The 1996 Michael Jordan Movie (Watch Video)

News.Com.Au - It’s a shame that the cross-promotion was so nauseating and over-the-top because otherwise Space Jam: A New Legacy has a lot of value. It’s more entertaining and better paced than the original, the character designs for the opposing team are impressive and it’s even used the Looney Tunes characters in a way that stays true to their legacy while also introducing them to a new generation of kids.

Flicks: Unfortunately, Space Jam: A New Legacy is two hours long. With such a simple story and an offensive amount of product placement, it struggles to maintain interest within that running time, so while this Space Jam successor proves itself to be surprisingly decent, it’s also destined to fade from memory.

The AU: A film that manages to visually reference characters from Game of Thrones, A Clockwork Orange, and The Matrix alongside the more family-friendly creations as Speedy Gonzalez (voiced by Gabriel Iglesias) and Lola Bunny (Zendaya) is one that should feel more bold than what this Space Jam achieves.  There’s wonder and disbelief to be held (try explaining A Clockwork Orange to your kids) but A New Legacy is mostly child-friendly fare that proves a colourful, inexplicable distraction that’s unlikely to retain, ironically, any type of legacy for itself.

(The above story first appeared on LatestLY on Jul 14, 2021 12:27 PM IST. For more news and updates on politics, world, sports, entertainment and lifestyle, log on to our website latestly.com).