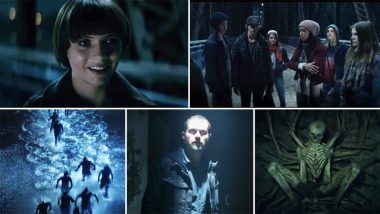 The first trailer of an upcoming horror film, The Empty Man, has dropped on the internet. The movie takes out a page from the book of urban legends. The movie has a cosmic horror vibe to it. The whispers of "the empty man, the empty man" make the atmosphere eerie. The movie directed by  David Prior is based on a graphic novel. Fans of the book will be watching the movie closely. We all know how tough it is to appease the fans with an adaptation. James Badge Dale, Samantha Logan, Stephen Root, Joel Courtney, Marin Ireland, and Aaron Poole star in key roles. Kaali Khuhi Trailer: Sanjeeda Sheikh And Shabana Azmi's Horror Film Will Make You Squirmish (Watch Video).

The official synopsis of The Empty Man reads:

"After a group of teens from a small Midwestern town begin to mysteriously disappear, the locals believe it is the work of an urban legend known as The Empty Man. As a retired cop investigates and struggles to make sense of the stories, he discovers a secretive group and their attempts to summon a horrific, mystical entity, and soon his life—and the lives of those close to him—are in grave danger."

Watch The Trailer For The Empty Man Here:

The Empty Man is slated to release on October 23. Just in time for Halloween. The movie is releasing in theatres, so it will be interesting to see how many people come out to watch it amid the pandemic. Either the studio is extremely confident about the film, like Christopher Nolan was about Tenet. Or the studio is trying to get rid of a bad product and blame it on the pandemic.

(The above story first appeared on LatestLY on Oct 16, 2020 10:16 PM IST. For more news and updates on politics, world, sports, entertainment and lifestyle, log on to our website latestly.com).