The Illegal, starring Suraj Sharma, Shweta Tripathi, Adil Hussain and Neelima Azim, is streaming on Amazon Prime Video today. Written and directed by Danish Renzu, The Illegal is a story of a young film school student in LA who had to give up on his dreams when his family needed the money. 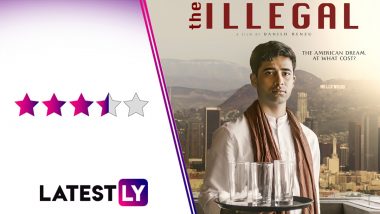 The Illegal Movie Review: The theme of an American dream gone bust isn't a new one for Indians. Even our overly melodramatic and mediocre commercial films have dealt with the same premise. (Remember Aa Ab Laut Chalein?) But where the filmmaker Danish Renzu's version The Illegal outscores everyone is that the film shows real emotions, identifiable vagaries of life squashing dreams and how the same life teaches you to survive despite it. India News | ‘The Illegal’ Shortlisted for Oscar in Best Picture Category

Haasan (Suraj Sharma) armed with an admission in the 'World's best film school' lands in LA to join the course, aided by a loan taken by his father (Adil Hussain). But things start going South the first day itself when his reliable uncle and his family decide to let him go as there isn't enough space at their place. He wanders in LA for a while before Babaji (Iqbal Thepa) comes to his aide. Haasan finds a job in The New Delhi Cafe where Babaji too is employed while also balancing his classes at the film school. One starts spilling over the other and the results are devastating.

The Illegal is written and directed by Renzu who has done a beautiful story-telling job. Starting from the streets of Daryaganj in Delhi where Haasan is coaxing his family members to say a few words about him in a video before he leaves, Renzu paints a relatable contrast where Haasan draws strength from this same video on a bad day in a foreign land. America or no, we all have gone back to these memories trapped in videos or pictures to brighten our mundane life whenever we miss our family. These scenes are quite effective.

Like I mentioned since the theme is not something wildly new, The Illegal scores in highly stimulating moments. The scene where Shweta Tripathi's Mahi, Haasan's sister and his biggest supporter, says how arranged marriage is like spending the rest of the life for someone else. Haasan's whole journey in America flashes in front of him while she says that. Haasan's equation with Babaji is also one of the most important aspects of the movie, fascinatingly dealt with.

What makes The Illegal even more powerful is Renzu doesn't unnecessarily try to heighten emotion with too much drama and intense background score. Be it Haasan's short-lived love story with Jessica (Hannah Masi) or his bonding with Babaji or his fights with Khan (Jay Ali), all get room to evolve on their own without any external push. That's the charm of The Illegal, everything that happens is organic and not force-fed to get the desired reaction.

What could be a deterrent here other than perhaps the sluggish pace, is the premise that has been watched before by the audience. While the pace works well with the treatment as it's a tender movie with controlled emotions, the narrative isn't new. For people to actually feel interested to watch it on Amazon Prime Video could be a challenge. Also, Jessica's inclusion in the story may have added some light moments to the proceedings but that wasn't really necessary in the context. At times, they seem like a distraction.

Check Out The Trailer Of The Illegal here...

Now coming to the best bit of the movie, performances. It's a Suraj Sharma show all the way. He is perfectly cast as Haasan. He shines in scenes where he needs to blow up with the anger of a person whose dreams have just been killed. It's done with finesse and polish. Renzu and Sharma seem to be in perfect sync in the entire movie. The one where he promises Babaji he will leave the cafe along with him with pure conviction gives you hope that the ending will be different.

Shweta Tripathi in her limited scenes catches your eye as she has a very affable presence. You can't help but like her. Jay Ali as the shrewd and manipulative owner of The New Delhi Cafe is just the wildness the tale needed.

- Fresh perspective to an old story

The Illegal is a must-watch for everyone who has a thing for Suraj Sharma or at one point in time harboured a dream to work in America. This movie will certainly not disappoint. The Illegal streams on Amazon Prime Video from today.

(The above story first appeared on LatestLY on Mar 23, 2021 02:17 PM IST. For more news and updates on politics, world, sports, entertainment and lifestyle, log on to our website latestly.com).