This Day, That Year: When Chadwick Boseman was Announced as Black Panther by Marvel and His Co-Stars

For the ones who don't know, today was the day (in 2014) when Marvel had officially announced Chadwick Boseman as the face of Black Panther. 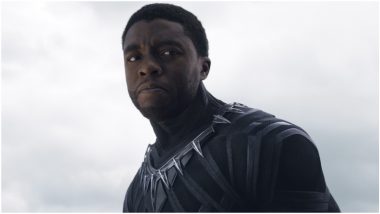 Black Panther star Chadwick Boseman left us for heavenly abode after his long fight with cancer. The actor passed away on August 28, 2020, leaving behind a legacy that will be remembered and cherished forever. For the ones who don't know, today was the day (in 2014) when Marvel had officially announced Boseman as the face of Black Panther and his co-stars including Robert Downey Jr and Chris Evans had introduced him as the newest addition to MCU family. RIP Chadwick Boseman: The last Tweet On Black Panther Actor's Twitter Account Becomes Most Liked Tweet With 6.1 Million Likes!

On October 28 (29 in India), 2014, Kevin Feige had officially announced Chadwick Boseman as his new superhero and the King of Wakanda. When a Twitter user shared this particular trivia about six years of Chadwick Boseman's introduction as Black Panther on Twitter, Chris Evans responded with a blue heart and crown emoji. The movie was a huge success at the box office and it also managed to bag the Academy Award in the costume department.

Four years since the announcement, Boseman is no longer amongst us but his memories will be etched in our hearts forever. "It is with immeasurable grief that we confirm the passing away of Chadwick Boseman. Chadwick was diagnosed with stage III colon cancer in 2016, and battled with it these last 4 years as it progressed to stage IV. A true fighter, Chadwick persevered through it all, and brought you many of the films you have come to love so much,” his family said in the statement. Chadwick Boseman Demise: Priyanka Chopra Mourns the Loss of the Black Panther Star, Says 'Your Legacy Will Live On Forever'.

To think of all his stunts in MCU movies while he was secretly battling cancer is shocking and admirable at the same time. We pray for his beautiful soul to rest in peace and thank him for everything.

(The above story first appeared on LatestLY on Oct 29, 2020 11:40 AM IST. For more news and updates on politics, world, sports, entertainment and lifestyle, log on to our website latestly.com).