Thor: Love and Thunder was amongst Marvel's 2021 releases. However, its shooting was abrupted due to the ongoing COVID-19 pandemic. The big-budget film will be co-written by Taika Waititi. 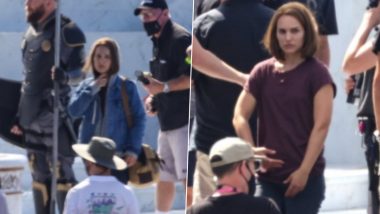 Thor: Love and Thunder is one of the most anticipated films currently. Fans are excited to see Chris Hemsworth reprise his role as Thor in the fourth franchise film. Natalie Portman is also making her comeback with the film and the news about her featuring as Lady Thor has made the wait for the film even more harder for her fans. The team flew down to shoot for the film in Australia last month and ever since then many photos and videos from the sets of the film have leaked online. Thor: Love and Thunder- Chris Hemsworth, Chris Pratt Shoot in Sydney While Natalie Portman Takes Riding Lessons, Pictures From the Sets of the Marvel Film Leaked!

After Chris Hemsworth and Matt Damon's pictures, Natalie's photos and videos, giving a glimpse into his character are now doing rounds online. In one of the viral pictures, we can see a ripped Jane Foster shooting for a key scene, Natalie has bulked up quite significantly and fans are impressed with her new avatar. A video also surfaced online where we can see Portman, mid-air, shaking with pain. It is being said that this will the very scene when her character will inherit Thor's abilities and wield Mjolnir, Thor’s magic hammer.

Other pictures from the set reveal that the location where Odin died and Hela crushed Mjolnir in Thor: Ragnarok will also have a key presence in the story. A new set has been created in the memory of Odin where we see Asgardian soldiers guarding it with spears in their hands. Tessa Thompson, who will be seen as Valkyrie, can also be seen in one of these photos.

Other Photos From The Sets:

the asgardians making an entire memorial area for the rock odin died on and for the shards of mjolnir from when hela destroyed it in the thor: love and thunder set pics... someone check on them and see if they’re okay pic.twitter.com/jpLKEPqFf9

Earlier, a leaked video from the sets of Thor: Love and Thunder had surfaced online where one could see an ariel view of the busy set of the film. The video then zooms into a place where Chris is shooting with his team. Dressed in his Asgard avatar, the actor seems to be shooting for a fun scene on a set that looks like a stage. A bunch of cast and crew members are also gathered around Chris in this leaked video. Chris Hemsworth Starts Shooting for ‘Thor: Love and Thunder’ in His Home Turf Australia.

Thor: Love and Thunder was amongst Marvel's 2021 releases. However, its shooting was abrupted due to the ongoing COVID-19 pandemic. The big-budget film will be co-written by Taika Waititi. Jennifer Kaitlyn Robinson will assist him with writing. The film which was earlier slated to release in November 2021, is now scheduled to hit the theatres on May 6, 2022.

(The above story first appeared on LatestLY on Mar 08, 2021 10:24 PM IST. For more news and updates on politics, world, sports, entertainment and lifestyle, log on to our website latestly.com).