Thor: Love and Thunder so far has been receiving many positive reviews saying that film is film is a fun ride filled with heart, but the plot can be uneven at times. 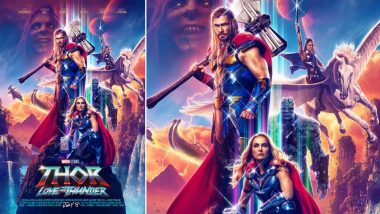 Thor: Love and Thunder is the first time a character in the MCU is set to receive a fourth film. With Thor: Ragnarok, Taika Waititi revitalised the God of Thunder, and Chris Hemsworth returns in this fourth outing. Being joined this time by Natalie Portman's Jane Foster who takes up the mantle of Mighty Thor, her and our God of Thunder will face off against Christian Bale's Gorr the God Butcher. Thor Love and Thunder: Review, Cast, Plot, Trailer, Release Date – All You Need to Know About Chris Hemsworth and Natalie Portman's Marvel Film!

Thor: Love and Thunder so far has been receiving many positive reviews saying that film is film is a fun ride filled with heart, but the plot can be uneven at times. Many also agree that it doesn't reach the same heights as Thor: Ragnarok. Let's take a look at some of the reviews for the film, and see what the critics are exactly saying.

Variety: The climactic battle, with its shadow monsters, its children caught in the cross-hairs, and its all-for-one exuberance, has a tingly grandeur, and by the end I felt something unusual enough to feel at a Marvel movie that it seemed almost otherworldly: I was moved. Moved by how two Thors could come together to love each other and to save the universe. I like plenty of Marvel movies just fine, but they are what they are, and what they are is products. This one has enough wide-eyed boldness and shimmer to earn the designation of fairy tale.

The Verge: Thor: Love and Thunder doesn’t come anywhere near being as much of a letdown as Multiverse of Madness was, but the two movies are alike in how they both seem to be the products of the MCU settling into an era where its future is still being figured out. At least some of that future’s teased out in Love and Thunder’s mid- and post-credits scenes — both of which are almost certain to be crowd-pleasers that satisfy those who show up already certain they’re in this for the long haul. But as the latest piece of lore defining the Odinson and his allies in the present, Thor: Love and Thunder is a clunky chapter in what feels like a franchise that’s still figuring itself out.

IGN: Thor: Love and Thunder is largely successful in honoring Thor’s long journey towards self-actualization and rarely falters while keying into the crackling chemistry between leads Chris Hemsworth, Natalie Portman, and Tessa Thompson. It’s essentially the MCU’s first romantic comedy, and plays with those tropes in delightful ways. But while Thor and Jane’s relationship is handled well, Love and Thunder is less deft -- and a lot safer than you’d expect -- in pushing the greater MCU story forward. Christian Bale’s Gorr feels underutilized and Tessa Thompson’s King Valkyrie takes a frustrating back seat, especially as the movie goes on. Taika Waititi’s signature humor and visual style persist from Ragnarok, and are essential to buoying the movie through its cookie-cutter plot. With Hemsworth as enthusiastic an Asgardian as ever, Thor’s future with both love and thunder are bright.

ComicBook.Com: Thor: Love and Thunder is undoubtedly a change of pace, whether compared to Thor: Ragnarok, Phase Four of the MCU, or even the larger tapestry of superhero adaptations. The film's heartfelt and reverential core feels perfect for its crop of characters and for the current cultural moment, but that perfection is hindered by bizarre structural choices and inconsistent CGI. At times, that messiness only further adds to the charm of Love and Thunder and its imperfect crop of characters, but it does stop the film from becoming another game-changing entry within the MCU. Luckily, just enough of Thor: Love and Thunder manages to charm and delight – especially its stellar ensemble cast – to still make it a worthwhile encore.

Independent: Of course, Ragnarok’s distinctive humour is carried over, and there’s a blissfully dumb running joke about a pair of giant, heavy metal-screaming goats. But, really, it’s the heart that matters here. Love and Thunder’s characters are all running towards the same conclusion: that, no matter how long or short our time on Earth (or any planet) may be, we’re all inevitably living for the benefit of others. We love. Then we love again. It’s nice for Marvel, always caught up in its own chaos, to remind us of something so simple.

Collider: So, while there might be complaints about the film's pacing or weaker first half, Thor: Love and Thunder recaptured exactly what charmed me about these MCU movies. I never once rolled my eyes at a joke that was clearly dropped in, so it could be a zinger and make it to the trailer. It successfully silenced a rather jaded MCU fan by offering a story that had it all without having to sacrifice its soul to the MCU machine that is eager to churn out stories for future phases. Thor- Love and Thunder Review: Early Reactions to Chris Hemsworth and Natalie Portman's Flick Are Out, Critics Say Marvel Movie Was Delightful and Gratifying!

Thor: Love and Thunder releases in theatres on July 7, 2022.

(The above story first appeared on LatestLY on Jul 05, 2022 06:59 PM IST. For more news and updates on politics, world, sports, entertainment and lifestyle, log on to our website latestly.com).