Here's what we think about this week's Hollywood release, X-Men: Dark Phoenix. 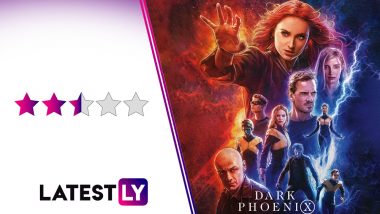 They say don't judge a book by its cover and I didn't! While Dark Phoenix's different trailers weren't mind-boggling, I hoped for its final outcome to be bigger and better. Sophie Turner returns as Jean Grey in X-Men's new offering and this time she’s ready to unleash her dark side. After Captain Marvel and Avengers: Endgame, superhero fans are eager to embrace this mutant and such overdoses are always welcomed and never harmful. X-Men as a franchise isn’t as successful as Avengers and the reasons are in abundance for that. However, that’s a topic for another day and today belongs to Dark Phoenix. Dark Phoenix: From Magneto to Mystique, All the X-Men Characters in the Film Fans Need to Watch Out For.

The movie revolves around Jean Grey’s (Sophie Turner) character and how she turns out to be the most powerful mutants of all. It’s during a rescue mission in the space when her character is hit by a powerful cosmic force that modifies her into something stronger. However, the same force is a vital factor that can help an alien race resurrect themselves. What follows next is them waging a war on our planet and the aftermath of Jean's alteration. She’s forced to face the evil side of hers that’s scary and daunting. Jessica Chastain is, in fact, an alien with an ability to shape-shift. She manipulates Jean to unfold her horrific side and things take an ugly turn when she (Jean) unwillingly kills one of their own.

X-Men has the most f***ed up timeline in the history of superhero movies. Yes, worse than Grant Gustin’s Flash series. With so many disappointing outcomes in the past, it’s really strenuous and a bit tiresome to keep a track of everything that we formerly witnessed. But leaving everything aside, I tried to enjoy it as a solo outing and there was so much scope to make it better. Yes, the extent to which this movie can evoke any wow element is very limited but let’s not criticise them for that. Dark Phoenix as a project has its own ‘yay’ moments and going in with a fresh mind may solve half the things for you. Dark Phoenix: 5 Major Problems Created for the Film by Continuity Issues in the X-Men Franchise!

The linear approach by Simon Kinberg works in the movie’s favour. The premise has no novelty factor where the heroes are fighting among themselves and the world is at the brink of extinction. The scenario here is however slightly bitter. In Dark Phoenix, Jean has to fight her inner demons amid her battle with X-Men. She loses control while struggling to cope up with her inner force and that eventually leads to Magneto’s entry. Now that I am talking about her struggles, I was unable to sympathize with her character. There was no lump in my throat nor could I hear my own voice, shouting and screaming for Jean to wake up and realise the terror she created.

Superhero movies are loaded with CGI these days and it’s no brainer. In Dark Phoenix too, you have a final battle between the mutants and the aliens where the latter aim to extract the cosmic powers from within her. Though the CGI scenes are nothing exceptional but the climax is mind-blowing. Especially the train sequence where Magneto's team joins hands with Charles' X-Men is something to watch out for. We bet you'll end up rooting and whistling for Fassbender's character and the way he beats them charismatically.

X-Men truly had the potential to be a phenomenal franchise. But some stupid attempts in the past ruined its future entirely. And Dark Phoenix is just paying a heavy price for the same.

It was a gamble to let Sophie Turner bear the entire weight of this movie on her shoulders. Did she succeed? Yes and no. While her character was powerful, she as an actress wasn’t. Blame it on the presence of some heavyweights like James McAvoy and Michael Fassbender but Sophie wasn’t able to shine and I am a tad disappointed in that department. When your premise is ordinary (another negative trait), you ensure your actors and characters are top notch. Sophie as Dark Phoenix was good but not good enough.

Also, X Men as a franchise did little or nothing for its key characters. The makers never established them nor did they give us any scope to empathize with them. That emotional connect that's usually so strong with all the Marvel characters was always missing and your heart doesn't even ache when some of these heroes bid goodbye. Writing in Dark Phoenix was flawed and dialogues were too random. If you leave aside the train sequence, there was nothing and we repeat nothing that was outstanding or worth your time.

As aforementioned, James McAvoy and Michael Fassbender woo you with their stupendous performance. They are a director’s delight and the more you see of them, the less it is. No, it’s not the fangirl in me talking but there are a couple of scenes when a vulnerable Professor X makes his character look so alive that you overlook what’s happening in the surrounding for that split-second. You get engrossed in him and he lets his brilliant acting skills do all the talking.

Michael Fassbender is another crucial character whose entry scene will make you jump with joy. Remember the 'yay' moments that I mentioned before? Those revolve around him and it won't be wrong to credit them for making this ordinary affair look a bit extraordinary.

Coming to Sophie Turner, she had an ample scope to shine in her newest outing but she failed to deliver any exemplary performance. There was a lot to communicate but it just kept simmering and never reached the boiling point. I tried searching Jean Grey or Dark Phoenix in her but the deeper I reached, the farther they went.

Jessica Chastain equally deserves a round of applause for being a manipulative who knows how to get her job done right. Tye Sheridan has his own moments and they are simply fine.

However, it's Jennifer Lawrence and Nicholas Hoult who are utterly wasted. What were they even doing in the movie? With poor dialogues and badly written characters, they simply existed throughout the premise but couldn't lend any helping hand to it. Another quick question. Where was Quicksilver?

Train sequence in the climax

The storyline with a confusing timeline

Go ahead for James McAvoy and Michael Fassbender. And if you have enough patience, wait till it comes on an OTT platform and you won't repent your decision.

(The above story first appeared on LatestLY on Jun 05, 2019 11:00 AM IST. For more news and updates on politics, world, sports, entertainment and lifestyle, log on to our website latestly.com).