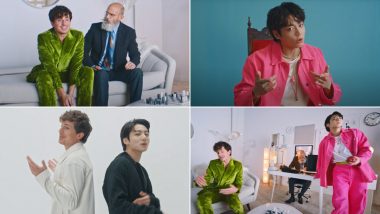 Left and Right, a collaboration single by BTS member Jungkook and US singer-songwriter Charlie Puth, has topped iTunes charts in 93 countries, the group's agency said Saturday. Big Hit Music said the uplifting summery song released the previous day ranked No 1 on iTunes Top Songs charts in 93 countries, including the United States, Canada, Denmark, Sweden and France, Yonhap news agency reported. Charlie Puth and Jeon Jungkook’s New Song Left and Right Is Out! The Duo’s Vocals and Visuals Are Sure To Put You in a State of Euphoria (Watch Video).

The music video for the song has garnered about 15 million views on YouTube as of Saturday morning, the company said. The tune, produced by Puth, will be included on his third full-length album, "Charlie," set for release in the second half of the year, according to Warner Music. Their collaboration came days after the South Korean septet announced a plan to take a break from group activities to focus on solo projects. Charlie Puth Breaks Down Reflecting on 'Worst Breakup' of His Life.

The two artists performed together on the stage of a South Korean music awards show in 2018. Stay tuned!

(The above story first appeared on LatestLY on Jun 25, 2022 09:28 PM IST. For more news and updates on politics, world, sports, entertainment and lifestyle, log on to our website latestly.com).