Mumbai Saga Movie Review: John Abraham and Emraan Hashmi's Face-Off Is The Only Saving Grace Of This Ordinary Outing!

Loosely based on the real-life siblings Amar and Ashwin Naik, but majorly operating from the realm of fiction, 'Mumbai Saga' shows John Abraham as a gangster who has been planted strategically to rule the city. Hashmi plays the cop who has decided to stop the bad boy's meteoric rise! 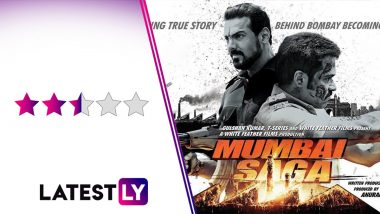 Let's keep the affair as simple as this endeavor! First of all, it's a  Sanjay Gupta film. So you know what to expect from it. But one does anticipate this new outing to be at least at par with the earlier 'Shootout' franchises. Unfortunately, Mumbai Saga starring John Abraham and Emraan Hashmi in the lead roles looks like scattered jigsaw pieces that hardly complete a coherent picture. One gets a feeling that Gupta has nothing new to offer besides those styled action sequences. low on intelligence,  equally low on the emotional quotient and not-so-high on performances, this film is a jog from one hurridly crafted sequence to another without much to tell engagingly.

If you have a big mountain man John Abraham, playing the big bully of the city and Emraan Hashmi is donning the uniform ( that of the cop), you can do a lot revolving around the proverbial 'cat and mouse chase. Their face-off shows glimpses of promise, but in the end, even that prospect is empty.  Replete with gore, guns and goons, Mumbai Saga fails to tell even a simplistic tale that engages you cerebrally. So there's no point raising the bar of your expectations and hoping to get some nice underworld gangster flick (read entertainment) in the end. Emraan Hashmi's ease is probably the only saving grace of the movie that's loaded with heavy-duty dialoguebazzi. And Hashmi does his part with remarkable ease to impress you. John gives his best in terms of intensity, but the choppy sequences and sloppy writing fails him. Mumbai Saga: Sanjay Gupta Feels His Films Are Only Made for the Big Screen, Says ‘Never Thought of Making Content for OTT’

Loosely based on the real-life siblings Amar and Ashwin Naik, but majorly operating from the realm of fiction, this film shows John Abraham,  as Amartya Rao, a vegetable seller turned gangster who has been planted strategically by the powerful supremo political leader (Mahesh Manjrekar) to rule the city of Mumbai. The first half of the movie revolves around Amartya's establishment as the power de facto gangster who breaks bones and squashes his enemies to a pulp. His nemesis Gaitonde (Amol Gupte) poses many hurdles and death threats to stop Amartya's meteoric rise, but Amartya simply soars.

Just when the first half looks like a never-ending snooze fest without you seeing yourself getting invested either in the story or in the characters, enters Emraan Hashmi (the role is so up his ally) to make matters a little bit interesting. The man is handed some really good lines and he uses them so smoothly (and as often as he pulls his mighty gun from the holster). From there onwards, the plot becomes absolutely predictable, so much so that you know who is going to do what to drag the narrative forward.

With more elements working against the film ( Yo Yo Honey Singh's trashy track topping the chart), than the components that work in the favor, Mumbai Saga is watchable on the following counts. John Abraham and Emraan Hashmi's face-off works well in parts, The action sequences are shot stylishly and the sound effect adds more drama to the proceedings. Mumbai Saga Movie: Review, Cast, Plot, Trailer, Box-Office Prediction and All You Need to Know About John Abraham, Emraan Hashmi’s Gangster Drama

John looks convincing in some really intense scenes and Hashmi adds more substance to the film that focuses too much on style. The rest of the cast too looks pretty average– Amole Gupte as the giggly gangster Gaitonde is now repetitive and boring to say the least (haven't we see the same tone in Kaminey and Singham already?) Ronit Roy as Amartya’s accomplices, Kajal Aggarwal as Amartya’s supportive wife Seema, and Prateik Babbar as Amartya’s brother Arjun, have done fairly well. Mahesh Manjrekar as the supreme leader who operates from the turf on manipulations and maneuvering stands out with his smooth screen presence.

(The above story first appeared on LatestLY on Mar 19, 2021 11:40 AM IST. For more news and updates on politics, world, sports, entertainment and lifestyle, log on to our website latestly.com).