Mumbai Saga: Sanjay Gupta Feels His Films Are Only Made for the Big Screen, Says ‘Never Thought of Making Content for OTT’

Sanjay Gupta said he has never thought of making content for OTT. The filmmaker, who is all set to release his John Abraham-Emraan Hashmi starrer Mumbai Saga, asserted his films are only made for the big screen. 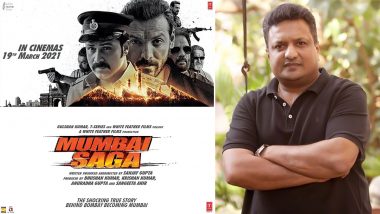 Known for his high-octane action films, filmmaker Sanjay Gupta said he has never thought of making content for OTT. The filmmaker, who is all set to release his John Abraham-Emraan Hashmi starrer Mumbai Saga, asserted his films are only made for the big screen. "I do not work on OTT. I am not even looking at the platform. My focus has been the big screen and on what will appeal to people sitting in a closed environment, on people who make an effort to go to watch the film," he told IANS. Mumbai Saga: Sanjay Gupta Heads to Ramoji Film City to Shoot the Remaining Portion of His Gangster Drama.

For Gupta, shooting Mumbai Saga has been quite an adventure for him due to the pandemic. "This has been an experience unlike any in my entire career. There has been a lot of uncertainty. At one point of time, it was like a life-and-death situation as there were portions to be shot and the pandemic had peaked. We completed shooting the film right in the middle of the peak. We sat on the film for six months after that. But somebody had to come forward among the bigger films, so we decided to go ahead and release the film. The advantage that we have over the other biggies is that our budget is not that huge. It is a calculated risk. By coming to the theatres we may not make money, but we will not lose money," he said. Mumbai Saga Teaser: It’s John Abraham VS Emraan Hashmi In This Action-Packed Gangster Drama! (Watch Video).

However, he adds that filmmakers like him are making an effort to ensure films get a good theatrical release. "People are requesting for more screens to open and we are going all out. Not more than 50 to 60 per cent screens have opened yet and we want to release our films in as many screens as we can. In a smaller film, you can still not do this. But for a film of this stature, size and ambition, there is no formality here. We have to release it in a big way," he said.

However, he said that it is tough to predict the footfall as of now. "We have no expectation and no prediction. We don't know how people will take to this and how many people will come. Nobody can predict. In Roohi, with every show, more and more people are coming. It is not a stupendous amount of people coming but this is a good sign," he said.

(The above story first appeared on LatestLY on Mar 17, 2021 11:00 AM IST. For more news and updates on politics, world, sports, entertainment and lifestyle, log on to our website latestly.com).