Pandit Birju Maharaj Dies at 83: From Kaahe Chhed Mohe to Mohe Rang Do Laal, Bollywood Dance Sequences Choreographed by the Legend That Will Forever Remain Iconic 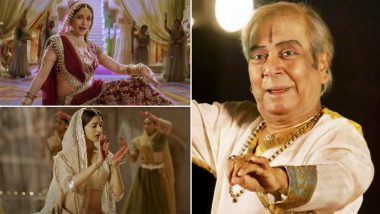 India woke up to the grim news of Kathak maestro Pandit Birju Maharaj passing away. His demise sparked tributes from around the nation. His granddaughter Ragini Maharaj also opened up about the legend's demise and revealed that the 83-year-old Pandit Maharaj Birju was under treatment for the past month. He had sudden breathlessness at around 12:15 - 12:30 am last night (January 16) when he was taken to the hospital. Within 10 minutes of his arrival at the hospital, he passed away after suffering a heart attack. Pandit Birju Maharaj Passes Away at 83: Remembering the Legendary Kathak Dancer Through His Achievements.

Maharaj was also honoured with Padma Vibhushan for his contribution to Indian art. A descendant of the Maharaj family of Kathak dancers, Pandit Birju Maharaj choreographed several songs in Bollywood such as 'Kaahe Chhede Mohe' from Devdas, 'Mohe Rang Do Laal' from Bajirao Mastani and many more. Remembering the legend, here is a look at some of the Bollywood songs that he had choreographed.

The song featured Deepika Padukone. She performed the choreography bu Pandit ji quite beautifully in this song sung by him and Shreya Ghoshal.

Pandit Birju Maharaj also made Kamal Haasan dance to his steps. He had choreographed this beautiful song from Vishwaroopam that still remains iconic.

Madhuri Dixit is an icon when it comes to classical dance and she often had the chance to work with the legendary choreographer. He worked with the actress on the Dil Toh Pagal Hain Instrumental Kathak Dance and created a masterpiece.

Madhuri and Birju Maharaj united for Devdas as well. This song is by far the most graceful song we have seen and all the credit goes to Pandit Birju Maharaj who knew how to put Madhuri's dancing talent to its best use.

Amongst many remembering the legend, Prime Minister Narendra Modi also expressed anguish over the sudden death of Kathak maestro Pandit Birju Maharaj. In his tweet, Modi acknowledged Pandit Birju Maharaj's remarkable contribution to the Indian dance form. Maharaj-ji, as he was popularly known, died surrounded by his family on Monday after suffering breathlessness. He was 83.

(The above story first appeared on LatestLY on Jan 17, 2022 11:57 AM IST. For more news and updates on politics, world, sports, entertainment and lifestyle, log on to our website latestly.com).