Pandit Birju Maharaj Passes Away at 83: Remembering the Legendary Kathak Dancer Through His Achievements

To name a few awards that the maestro had bagged in his lifetime - he had received honours like Sangeet Natak Akademi Award in 1964, Nritya Choodamani Award by Sri Krishna Gana Sabha in 1986, Kalidas Samman in 987, Lata Mangeshkar Puraskar in 2002 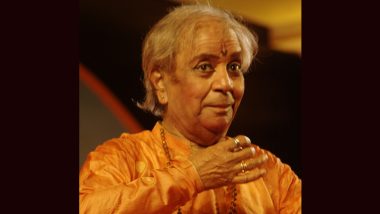 The world of art woke up to a sad news today. Kathak maestro, Pandit Birju Maharaj, passed away after suffering from a heart attack. He was 83 when he breathed his last. The news of his demise was confirmed to ANI by one of his relatives. Pandit Birju Maharaj's grandson Swaransh Mishra, too, shared the unfortunate news on his social media. The country has been shattered upon learning that we lost another legend with celebrities flooding Twitter with messages for the maestro. Pandit Birju Maharaj 82nd Birth Anniversary: 9 Fascinating Facts About the Legendary Kathak Dancer You May Not Have Known.

Apart from being a renowned Kathak dancer, Pandit Birju Maharaj was also a well-known classical singer and had lent his voice to several films. For his remarkable contribution, the government of India had honoured him with the country's second-highest civilian award, Padma Vibhushan, in 1986. An exponent of the Lucknow Kalka-Bindadin Gharana of Kathak dance in India, Pandit Birju Maharaj was a descendant of the Maharaj family of Kathak dancers. he carried forward the legacy of his two uncles, Shambhu Maharaj and Lachhu Maharaj, and his father and guru, Acchan Maharaj.

Having worked with his uncle, Shambhu Maharaj at Bhartiya Kala Kendra for quite some time, Pandit Birju Maharaj moved on to work at the Kathak Kendra, New Delhi. He continued to head the academy for several years, till his retirement in 1998. He then opened his own dance school, Kalashram, also in Delhi.

To name a few awards that the maestro had bagged in his lifetime - he had received honours like Sangeet Natak Akademi Award in 1964, Nritya Choodamani Award by Sri Krishna Gana Sabha in 1986, Kalidas Samman in 987, Lata Mangeshkar Puraskar in 2002, Honorary doctorate from Indira Kala Sangeet Vishwavidyalaya, Honorary doctorate from Banaras Hindu University, Sangam Kala Award, Bharat Muni Sammaan and more.

He had also bagged the National Film Award for Best Choreography for Unnai Kaanaathu for Vishwaroopam in 2012 and a Filmfare Award for Best Choreography for 'Mohe Rang Do Laal' (Bajirao Mastani) in 2016. He composed the music, and sang, for two dance sequences in the Satyajit Ray's Shatranj ke Khilari as well. He even has choreographed the song 'Kaahe Chhed Mohe' from the 2002 film version of the novella Devdas. Kathak Legend Pandit Birju Maharaj Passes Away; Rajnath Singh, Others Pay Tribute to Padma Vibhushan Awardee.

Talking about his sudden demise, Pandit Birju Maharaj's grandson Swaransh Mishrawrote on Instagram, "With profound grief and sorrow we inform the sad and untimely demise of our most beloved member of the family, Pt. Birju Maharaj Ji. The noble soul left for his heavenly abode on 17th Jan 2022. Pray for the departed soul.. Grief-stricken: Maharaj family."

(The above story first appeared on LatestLY on Jan 17, 2022 11:08 AM IST. For more news and updates on politics, world, sports, entertainment and lifestyle, log on to our website latestly.com).