Pari Screamer 3: Anushka Sharma's spooky 'I Love You' Will Give You the Chills This Valentine's Day 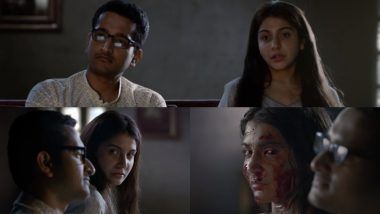 If there is any Bollywood movie that I am afraid to go watch in the theatres for all the right reasons, it would be Pari. Whatever promos we have seen till now has been spooky, and induced the right amount of chills. Never thought that a cute-looking Anushka Sharma can be made so grotesque and bloody that she will scare the daylights out of us. Pari is directed by Prosit Roy and produced by Anushka Sharma under Clean Slate Films banner, while presented by KriArj Entertainment & Kyta Productions and will be released worldwide by Pooja Films. Apart from Anushka Sharma, Parambrata Chatterjee, Rajat Kapoor and Ritabhari Chakraborty also play integral roles in the movie.

We have had two teasers, I mean, 'screamers' and a proper teaser from the makers till now that were creepy, spooky and intriguing all the the same time without revealing much about the plot. All we know is that Anushka Sharma is possessed by something that makes her grow her nails and her face go all bloody. We also know that Parambrata is playing her husband here.

Now we have the third screamer that seems to be Pari's way of greeting us on Valentine's Day in its own spooky, bloody way. The screamer has a pale looking Anushka and Parambrata watching something on television before Anushka, suddenly, tell him 'I Love You'. A surprised Parambrata acknowledges her declaration of love with a bemused smile before he resumes watching the television. Then suddenly only Anushka begins to hear someone saying 'I Love You' in a spooky way, and I won't spoil the rest.

Watch what happens in the video below,

BTW, the first trailer will land tomorrow. So keep your eyes peeled for that.

(The above story first appeared on LatestLY on Feb 14, 2018 11:12 AM IST. For more news and updates on politics, world, sports, entertainment and lifestyle, log on to our website latestly.com).