Sajid has been learning Tabla for last 18 years. He has performed on several TV Shows & performs in Concerts all across Bangladesh. His main art form is Indian Classical. Currently, he is learning under his Guru Ustad Ilias Khan disciple of Ustad Alla Rakha & Ustad Kamruzzaman Moni. 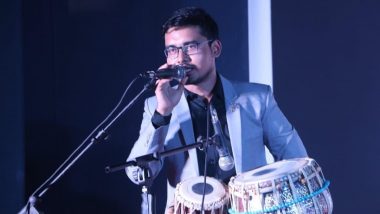 Sajid Rahman, one of the most promising Musician of this Generation from Dhaka, Bangladesh. Born in 6th June,1998. From the very beginning of his childhood, he got Inspiration specially from his father & other family members. Sajid’s Musical carrier started when he was 10. Currently living in Dhaka, Bangladesh. Earlier, He used to live in Tangail from where he started learning music from different Gurus & then his musical carrier started.

Back in 2010, he left Tangail & shifted to Dhaka with Family where his Musical Carrier got much more flourished. As Dhaka is the main Hub for Musicians in Bangladesh. Shifting to Dhaka he got privileged to learn Music under different Renowned Gurus & Famous Institutions. Sajid’s main focus is on Indian Classical Music. During his teenage he started learning Classical Dance. His first Institution was Bangladesh Shilpakala Academy. Afterwards, he started learning Tabla & Percussion.

From Childhood,Sajid’s Inspiration was his Father as he was also a Performer. His sister is also a Singer & Doctor as well. His sister took training on Classical Music from Renowned Gurus of Tangail & Bangladesh Shilpakala Academy. So, from early childhood he grew up in a Musical Family & Music was on the air.

Sajid is a Lifetime enlisted Musician on the only stated runned Television Channel named Bangladesh Telivion (BTV) & also a Content Creator on Youtube. Worth Mentioning, Sajid was the Youngest Performer from Bangladesh on ICC World Cup 2011 Opening Ceremony. All his works got wide range of Media Coverage including Newspaper, TV Channel across home & abroad.

Sajid has been learning Tabla for last 18 years. He has performed on several TV Shows & performs in Concerts all across Bangladesh. His main art form is Indian Classical. Currently, he is learning under his Guru Ustad Ilias Khan disciple of Ustad Alla Rakha & Ustad Kamruzzaman Moni.

Sajid is very much experienced in Composing & Professional Stage Concerts. Some of his works can be found on YouTube & other Social Platforms.

Sajid is currently doing MBBS in a renowned Medical College in Dhaka. He is a very bright student from childhood. It was regular routine from his childhood to perform in Concerts or TV Programme. Various programme schedule never hampered his study. As he has become very much efficient managing study & music side by side. It is known to all that Medical Study is very hard . Even after that, Sajid is still performing in concerts & doing TV Programme.

Sajid is very much punctual & honest with his works. After completing his MBBS he aims to give service for mankind as well as doing music as a regular routine of life.