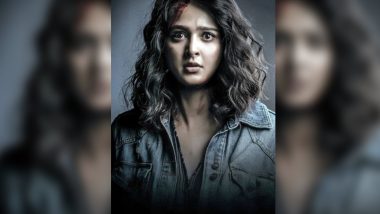 There are several filmmakers and producers, across film industries, who have already opted for OTT platforms for the release of their films while some are still wondering to go for theatrical release. It is owing to the coronavirus pandemic that many makers had to skip theatrical release as the cinema halls are closed. Even now there is no clarity by when the theatres will reopen but film exhibitors expect the makers to opt for theatrical release. Considering the amount of losses that will happen, many have decided to go for a direct web release and the next film to join the bandwagon seems to be Anushka Shetty starrer Nishabdham. Nishabdham Teaser: Anushka Shetty and R Madhavan Team up for Promising and Thrilling Whodunit (Watch Video).

Nishabdham is the upcoming thriller film directed by Hemant Madhukar. This film features Anushka Shetty as a mute artist named Sakshi. R Madhavan and Shalini Pandey would also been seen playing key roles in this movie. Nishabdham was first set to be released in January end and was later postponed to April 2. The release date had to be pushed yet again due to the ongoing global crisis. The makers have not announced the new release date yet.

Kona Venkat recently conducted a poll on Twitter in which he had asked, “If u have to wait till January or February for theatres.. Where do you want to see Nishabdham? 56% voted for ‘OTT’, 29% voted for ‘theatres’ and 15% voted ‘anywhere is fine’”. He then responded as saying, “We Thank you for ur feedback.. We will do our best to satisfy everyone and ur co-operation is very valuable to our team.” Nishabdham Trailer: The Suspense in This Anushka Shetty, R Madhavan Starrer Will Make You More Eager For This Film (Watch Video).

We Thank you for ur feedback.. We will do our best to satisfy everyone and ur co-operation is very valuable to our team 🙏 pic.twitter.com/uh5giD042R

Nishabdham has been shot simultaneously in Telugu and Tamil and the latter version is titled as Silence. This film is produced under the banners of People Media Factory and Kona Film Corporation. Let’s see if the makers of Nishabdham opt for an OTT release or wait for theatres to reopen.

(The above story first appeared on LatestLY on Aug 18, 2020 10:46 AM IST. For more news and updates on politics, world, sports, entertainment and lifestyle, log on to our website latestly.com).