Nishabdam producer took to his Twitter account to reveal if Anushka Shetty's next release will ditch theatrical release and premiere on an OTT platform instead. 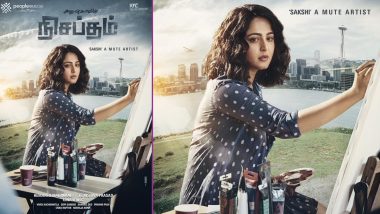 Will Anushka Shetty's Nishabdam ditch its theatrical release and have an OTT premiere? There are enough rumours to support that thought but the reality could be starkly different. While Amazon Prime has already announced its big list of seven releases that will premiere on their platform, Anushka and R Madhavan's Nishabdam may or may not follow their suit. The film's producer Kona Venkat has recently reacted to all the rumours clarifying that they haven't taken any decision yet. Nishabdham Teaser: Anushka Shetty and R Madhavan Team up for Promising and Thrilling Whodunit (Watch Video).

The producer earlier took to his Twitter account to clear the air around his film's OTT release and tweeted the same saying  “Lot of speculations are being made on the release of our film Nishabdam in the media. We would like to clarify that ‘theatrical release is our top PRIORITY. If the situation isn’t favorable for a long time then our alternate would be to release on OTT platform”. Hope for the best (sic).” Nishabdham Song Ninne Ninne Promo: Sid Sriram Croons a Romantic Number for Anushka Shetty – R Madhavan Starrer, and Its Winning Hearts (Watch Video).

Lot of speculations r being made on the release of our film NISHABDHAM in the media.We would like to clarify that “Theatrical release is our top PRIORITY.If the situation isn’t favourable for a long time then our alternate would be to release on OTT platform”. Hope for the best👍

Going by the film's teaser, Anushka plays a deaf and mute artist while Madhavan plays her husband in the film. It revolves around the murder of a key character and the subsequent investigation to find the killer. The entire film has been shot in Seattle, USA. The film was originally shot in Tamil and Telugu, and the makers later planned to release it in English, Hindi, Malayalam and Kannada. The film has been titled Silence in English and Hindi.

(The above story first appeared on LatestLY on May 23, 2020 04:55 PM IST. For more news and updates on politics, world, sports, entertainment and lifestyle, log on to our website latestly.com).