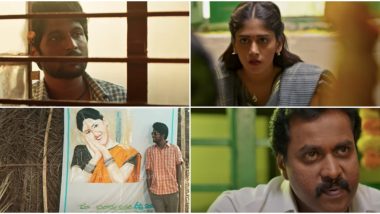 The teaser of Sandeep Raj's upcoming Telugu film, Color Photo has now been dropped on social media. As reported earlier, the teaser was released by Tollywood hunk, Vijay Deverakonda. The actor not only shared the teaser online but was also all praises for it. While the film's first look was released by Nani last year, the teaser is now here and already winning a lot of love. The film stars Suhas and Chandini Chowdary in lead roles. It is based on a true story and the freshly released teaser is sure to leave you intrigued. Vijay Deverakonda Slams Gossip Portals For Circulating Fake News About Him in a YouTube Video; Mahesh Babu Tweets In His Support.

The teaser showcases a love story that delves deep into issues of appearances and mainly shows how a dark-skinned guy who falls for a local beauty, has to go through several trials and challenges to win her love. The teaser looks promising with Suhas and Chandni's genuine performances. We also get introduced to the antagonist of this story and it is actor Sunil, who is otherwise known for his comic roles. The film's music has been scored by Kaala Bhairava. Sharing the teaser of the film, Vijay Deverakonda wrote, "Well done! I feel super proud to see these boys follow their dreams and make them happen. It's looking good and I send my best wishes to the entire team. Special wishes to @Mee_Sunil anna.."Vijay Deverakonda Sets Up Rs 1.30 Crore Relief Fund to Help The Affected During COVID-19 Crisis (Watch Video).

Well done! I feel super proud to see these boys follow their dreams and make them happen.

It's looking good and I send my best wishes to the entire team. Special wishes to @Mee_Sunil anna..

The film was reportedly set to be released in October but due to the pandemic situation has now been postponed. The release date of the film is yet to be confirmed. Directed by Sandeep Raaj, the film has been produced by Bunny Muppaneni and Sai Rajesh Neelam.

(The above story first appeared on LatestLY on Aug 05, 2020 07:34 PM IST. For more news and updates on politics, world, sports, entertainment and lifestyle, log on to our website latestly.com).